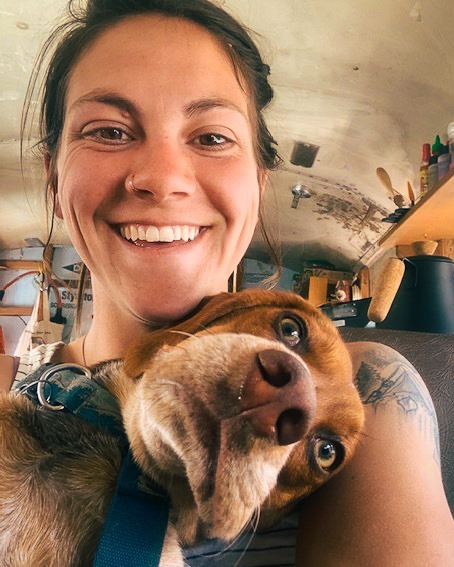 Elena Donharl is Mild to Wild’s HR and Operations Manager— she also turns back into a Lower Animas or San Miguel river guide on occasion when the swell of the rafting season comes crashing through Southwest Colorado.

Elena started rowing on the Lower Animas in 2018 after seeing her older sister, Emma, have all the fun with her summer gig year after year. In 2020, Elena and Emma would find themselves running the San Miguel together, alongside two other guides, Bella and Sam.

The San Miguel River flows from the backdrop peaks of Telluride, Colorado. From its headwaters above 12,000 ft, the snowmelt stream barrels through a narrow and shallow canyon at an average gradient of 63 feet per mile.

The rapid descent and skinny passage makes for the perfect combination of waves and holes to keep on keepin’ on mile after mile. You could ask just about any Southwest Colorado river guide about this free flowing beauty, and they’d probably tell you this river is a downright favorite. 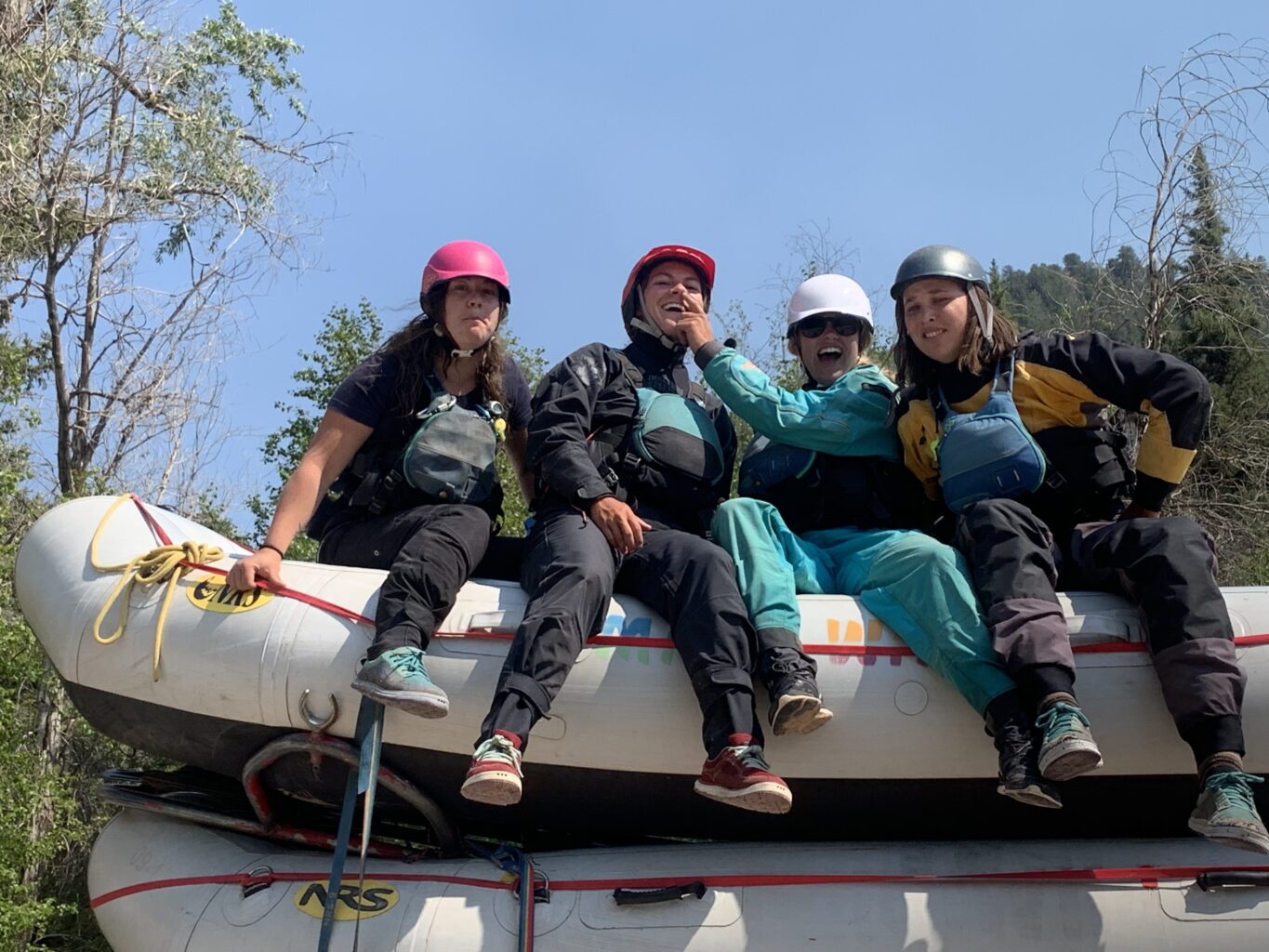 Elena began running the San Miguel during a record high year in 2019, when the 2,000 CFS that filled the corridor was considered pretty darn close to its tipping point. The next year in the heart of springtime, she found herself paddling the frothing stream more than her usual town run through Durango.

The crew joining her was the first the San Miguel had ever seen: A crew of all women, some with more experience than the majority of all Mild to Wild’s Southwest Colorado guides.

“We kicked ass. We didn’t have any swimmers, everyone showed up on time, everyone enjoyed themselves…” Elena said.

Paddles in the Water, or Not 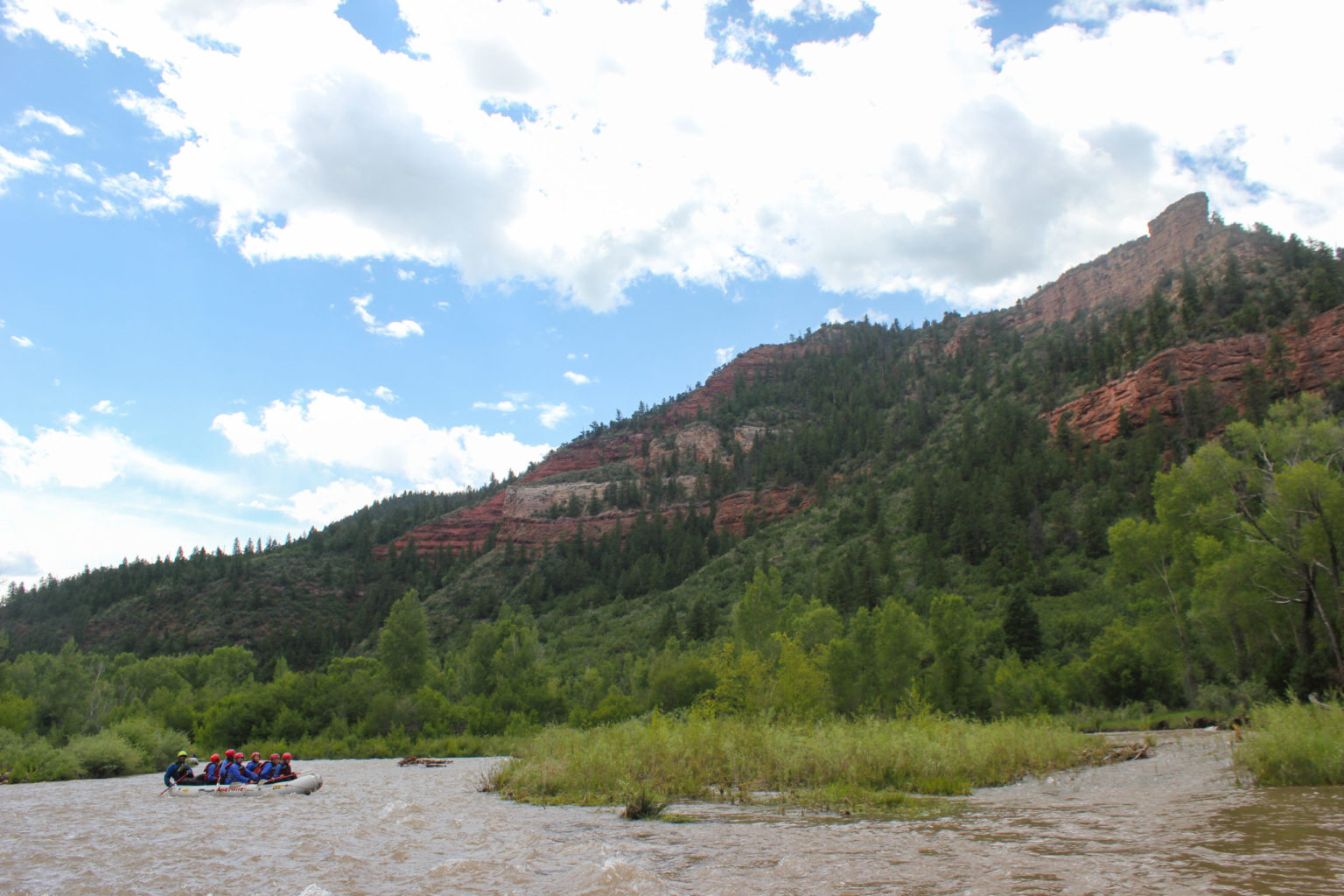 But despite their navigation skills of skirting the narrow bends, dodging strainers, and riding out every drop upright, each of the guides faced a constant stream of indiscrete discrimination from various guests on nearly every trip they took downriver.

“When people would show up, they would look around and ask ‘Are the guides coming?’ while we strapped them into their PFDs and unloaded the boats off the truck,” Elena said. “But you always get ten times the comments when it’s just females, nobody ever notices when it’s an all men’s crew.”

“You really rely on your paddle crew on the San Miguel, the river moves so fast, you only have a few seconds to get where you need to get, and people would think they’re helping by prying off a rock with they’re paddle, but they don’t see another massive rock or tree you’d rather not be stuck on,” Elena said. 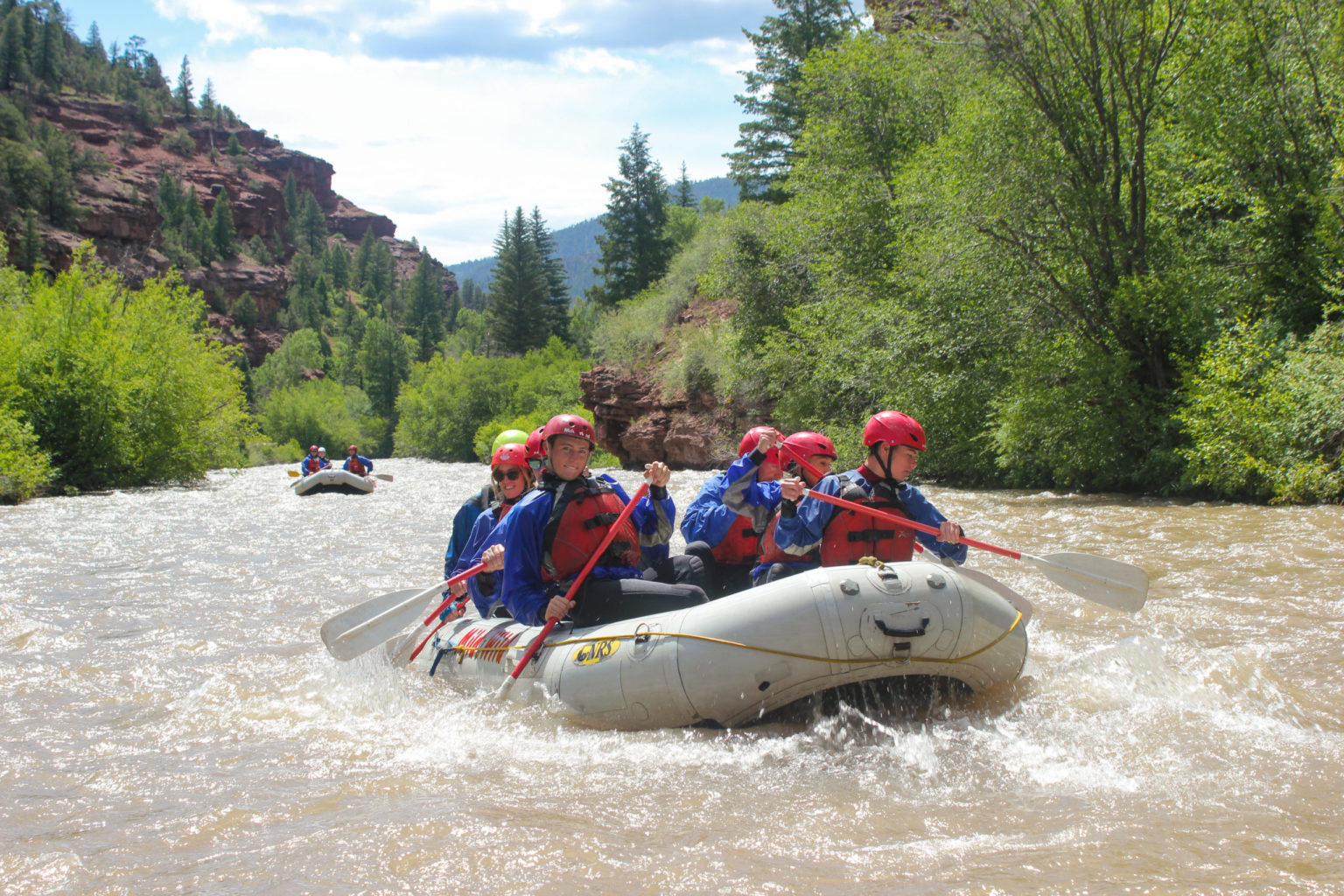 And if it wasn’t on the river, comments would come around their driving or about hauling the trailer.

“‘Woah, woah, woah take it wide!’ they would say to Sam Gray who’s been driving tractors and massive equipment her entire life,” Elena said. “It was discouraging. It’s like, you don’t even know me, and you already judge me because of my gender.”

But with the bad, misogynistic apples came others who were completely pumped to be a part of something truly rare in rafting and outdoor recreation at large.

“Plenty of other people were stoked, yelling ‘We’re making history!’” as Elena and her boat full bounded into the crimson canyon.

Changing Expectations of the River Guide 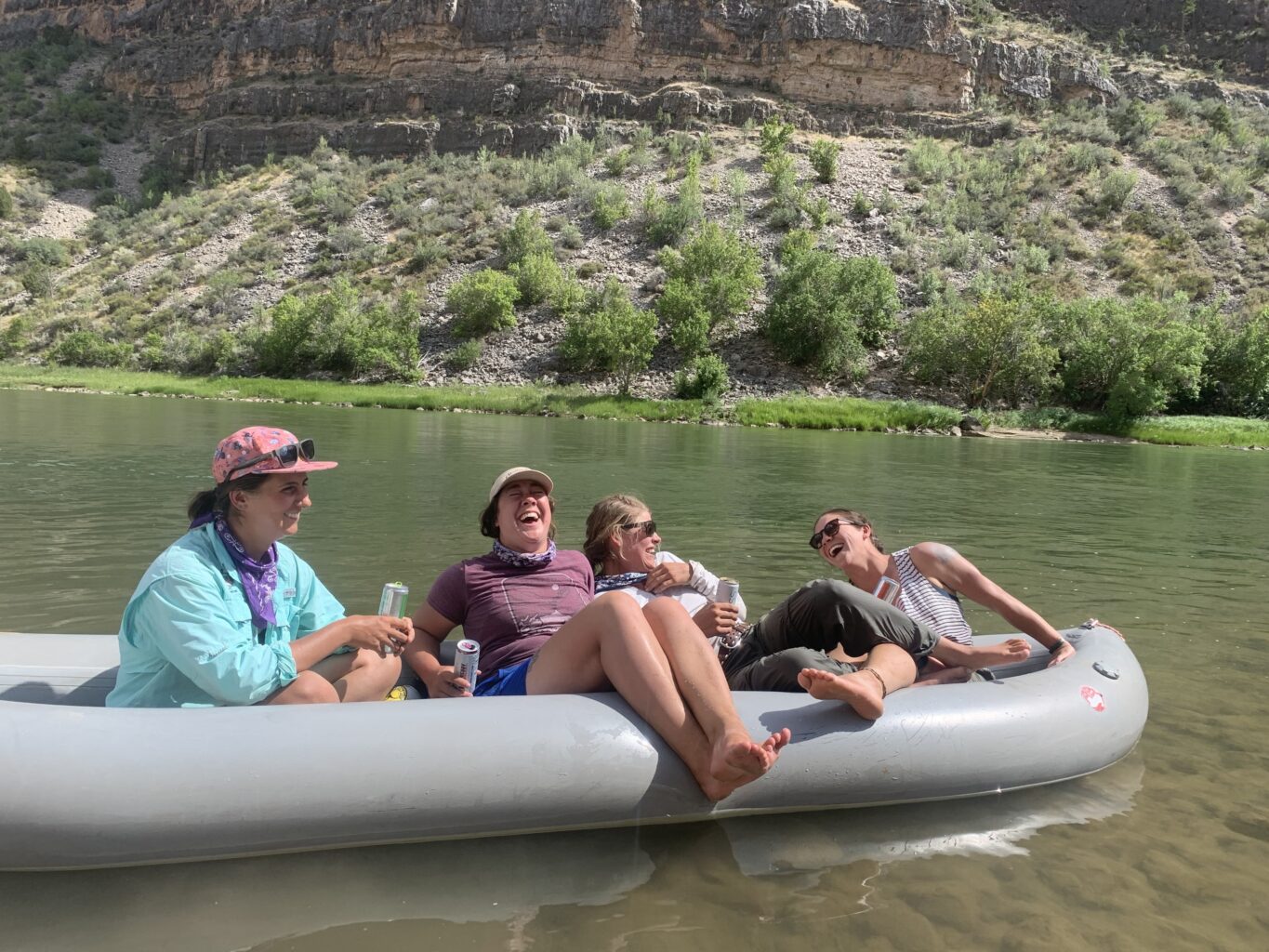 The San Miguel isn’t the friendliest of rivers for young children, bad swimmers, or those with disabilities. But on one trip, a guest with a pacemaker showed up at the request of his family.

He looked at Elena’s sister, Emma, a class V guide who runs the most difficult commercially run rivers in the U.S, and asked, “How long have you been guiding?”

After about an hour of weighing out the risk of joining the trip, he climbed into Emma’s boat.

“Emma runs the entire section and doesn’t even get a drop on this guy,” Elena recalled. “She was so mindful with her lines, gracefully gliding down this wild river. He came back to Durango the next year, and requested her to run him down the Lower Animas.”

The gals finished out the San Miguel’s short, but oh-so sweet season united. The experience of conquering rapids from morning to dusk, camping with one another, and running a satellite operation indubitably brought each of them together in a way only guides can understand. 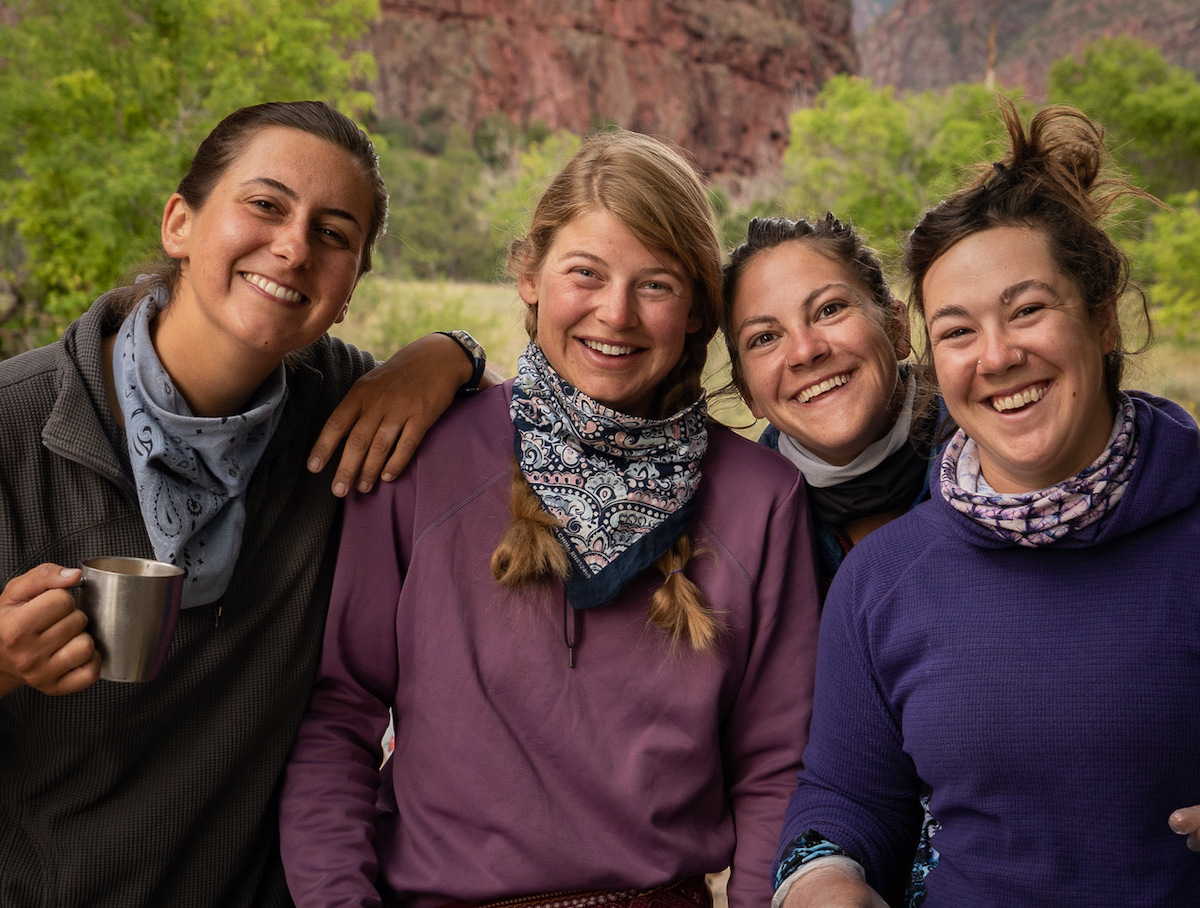 Since then, Elena’s run trips with each or all of them multiple times, from the gargantuan glory of Lodore Canyon to the tried and true river they’ve all trained on— the Lower Animas.

And while running the San Miguel is stepping stone into bigger white water like it was for her sister, Elena’s decided to kick it on the “mellower” drops for her own enjoyment when she’s not running operations from her desk right outside the boatyard.

This deep love Elena and nearly every other San Miguel river guide shares for comes not only from how fun it is to raft, but how much it’s taught her about skill, leadership and collaboration. When it comes to her two weeks spent on Telluride’s first all women raft guiding crew, it’s a memory that is undoubtedly one for the books.

“Something about all women, we have to take victory when we can.”

A River Guide’s Wild Beginnings with the Salt River