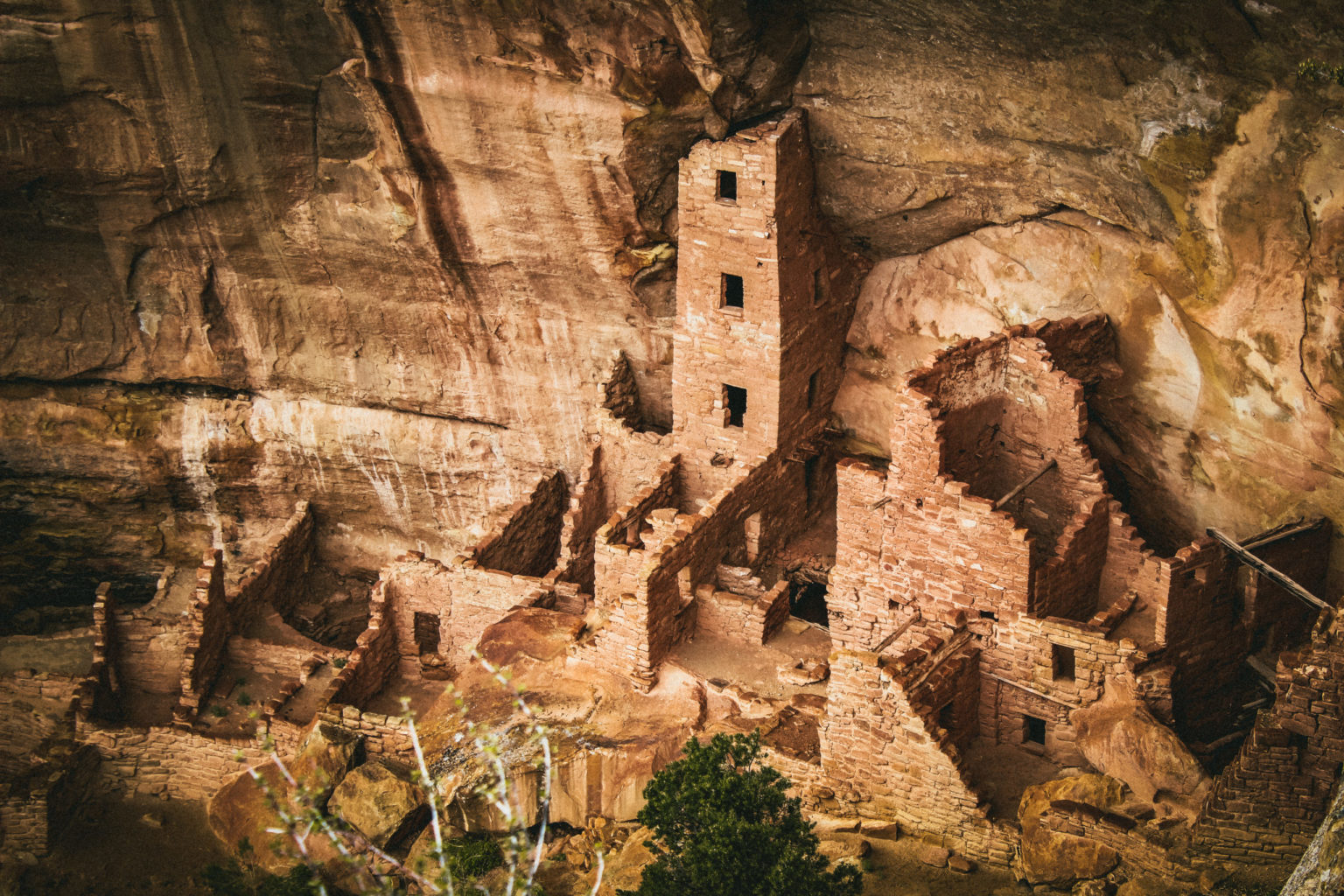 In the divide between desert and alpine through glowing valleys of juniper, the cliff dwellings of Mesa Verde National Park stand much like they did over 600 years ago.

The ancient high-rise city easily beckons our imagination. In the T-shaped doorways of sandstone apartments, we can envision gaggles of children running around while their parents convene in the nearby kiva. Ladders lounge against ledges for deliveries of freshly picked corn, and the sheer exposure is second nature to the residents.

They intentionally chose perches that faced south as they promised direct sunshine in the winter and welcomed shade in the summer from the high hanging sun. Bricks were cut out of the cliffs and carved into fairly uniform blocks using river bed rocks. The mortar was a mixture of ash, soil and water— with maybe a few turkey feathers thrown in for good measure. And the rest required an astute understanding of geometry, despite having no written system for numbers and letters at the time.

But as quickly as the Ancestral Puebloans filled the alcoves during the early 13th century, Mesa Verde’s massive cliff dwellings were completely vacant by 1275, per Archaeology Southwest. Why they abandoned these impressive complexes less than a century after they built them is still somewhat of a head scratcher. It’s estimated that nearly 26,000 people lived throughout Mesa Verde, and some deduce that they perhaps prospered too quickly for the available resources to keep up.

But, because the cliff dwellings have aged so gracefully under their natural rooftops, they undoubtedly have plenty to teach us about the people who created them. Read on for more about what these ruins have to say about the Ancient Ones.

They Probably Weren’t Avoiding an Enemy

The views from the cliff dwellings in Mesa Verde are unquestionably advantageous if you’re worried about intruders. However, the placement and architecture of the structures show that the Puebloans probably weren’t playing defense— at least not with other people anyway.

Droughts on the other hand were a worthy opponent. Luckily, alcoves naturally supply springs and rainfall collection since they’re sculpted by water absorption in the first place. It seems to be a more probable reason for the locale, especially since many of the alcoves prove to be inconvenient in their confine.

Also, the open kivas and balcony spaces like in Cliff Palace show that people were pretty out in the open during their daily to-dos. We also know that those who lived here traded with outsiders on the regular. Seashell jewelry, cotton from southern Arizona, and copper bells from Mexico were among the many items found in the ancient city, per Archaeology Southwest. On top of that, permanent Moki steps don’t necessarily send a message of paranoia from the residents either.

One particular cliff dwelling in Mesa Verde does have an air of avoidance however. It’s known as the Balcony House, which boasts a narrow tunnel that connects to a series of passageways, which lead to a three story ladder up to the dwellings. It’s a north-facing alcove as well, which means it was probably too chilly to live in for a good chunk of the year. Although, the alcove does host two sizable springs, which may have been the only reason for building this particular high-rise in the first place, per NPS.

The Way of Life had Changed 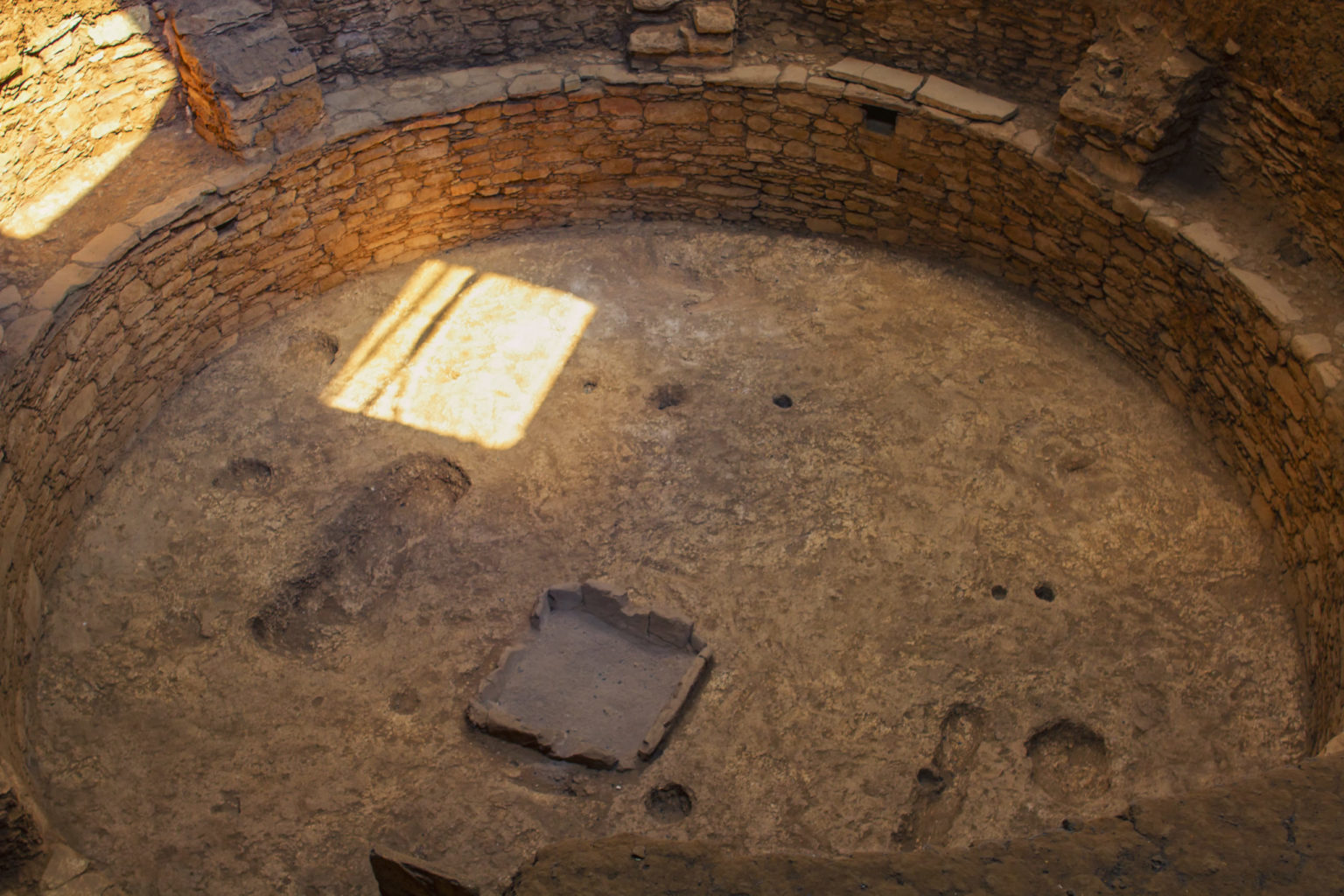 Life for people in Mesa Verde was pretty rural before the 13th century. Families lived in single room homes, and if the crops weren’t succeeding, it wasn’t a big deal to leave the little dwelling for greener pastures. But a steep uptick in migration in 750 C.E seemed to change all of that, despite the dry weather patterns this area was long accustomed to, according to Archaeology Southwest.

This would mark the beginning of a new era as the descendants of the Basketmakers started shaking things up on the mesa tops. They now had the agricultural chops to plant larger living quarters next to hefty plots of squash, bean and maize. One of these pivotal areas in Mesa Verde are the Far View sites. These villages were the most populated settlements through the 1100’s, and actually stayed that way even after the cliff dwellings came along.

With the influx of this growing community came with the venues to match. Larger kivas and plazas began to take shape for ceremonies, trading and the occasional dance battle— perhaps. Some of their additions are essentially the same as what we use today for our own community spaces, like the molded benches and raised fire pits that can be found at the Long House and Fire Temple dwellings, per NPS.

These forms of architecture tell us that the Puebloans had the time to recreate, people watch, and gossip about so-and-so’s turquoise pendants from down south. So times were probably pretty good when these structures came to fruition.

There Was Time for Creativity 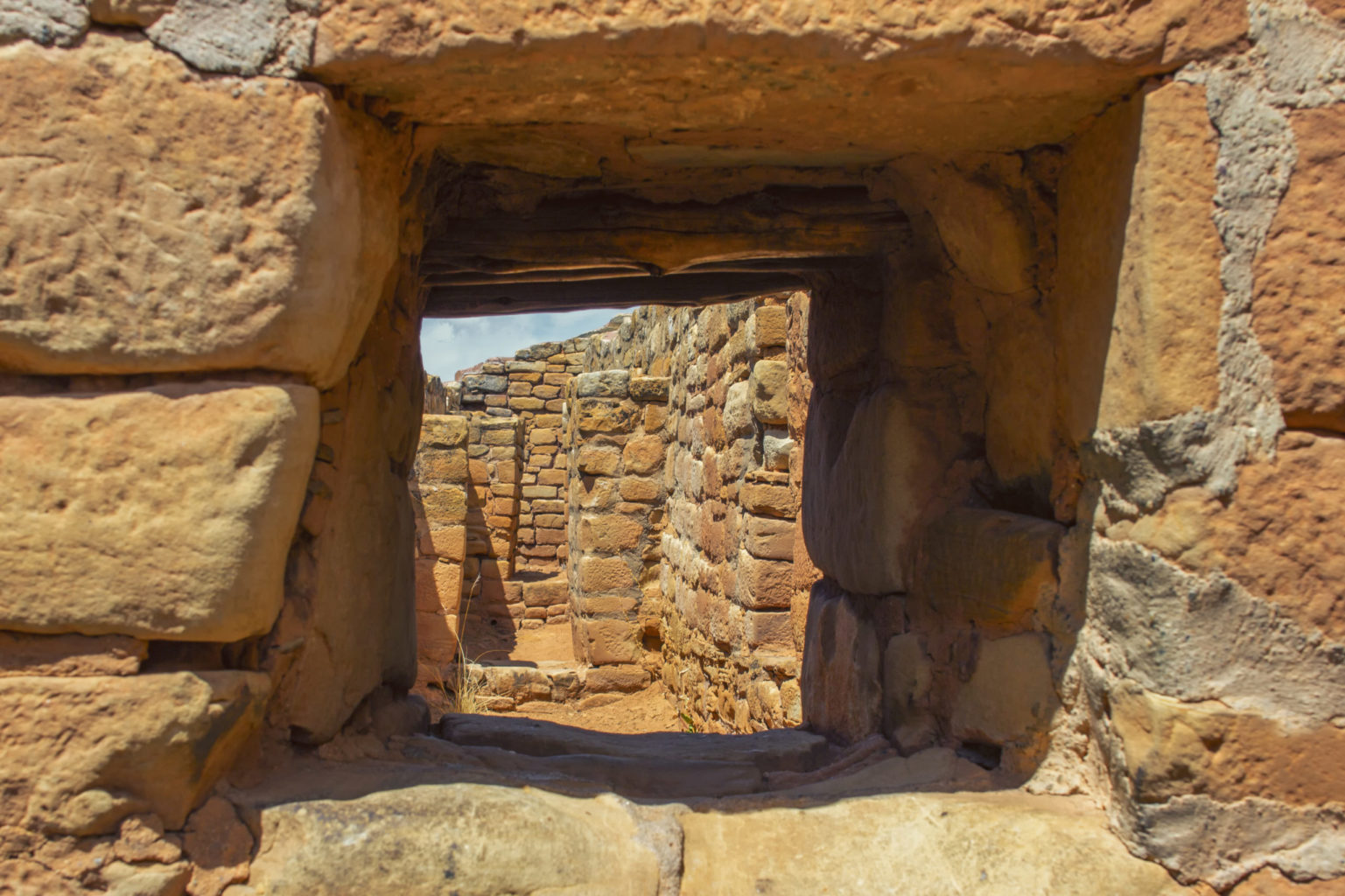 Today, the stacks of tawny bricks throughout Mesa Verde National Park are far from what they used to look like. Archaeologists have found that these ancient complexes used to be pink, red, yellow, white and covered with artwork.

They adorned their doorways with handprints and their bedrooms with petroglyphs, per Live Science. But just like the paint on our own homes, it’s always the first layer to flake away over time.

The treasure-trove of artifacts left inside the dwellings also tells us that the Puebloans weren’t just wrangling turkeys and picking on pinions all day. They developed unique styles for their home goods, like black and white pottery, or the intricate sandals they wove from yucca plants.

Kivas also had a bit of creative character built into them. Many follow the same layout with a fire pit, ventilation shaft, divots in the floor for looms, and a Sipapu— which is a hole situated on the north end of a kiva. It is believed to represent the portal from which humanity climbed out of, and is certainly indicative of the spiritual practices these spaces set the stage for. 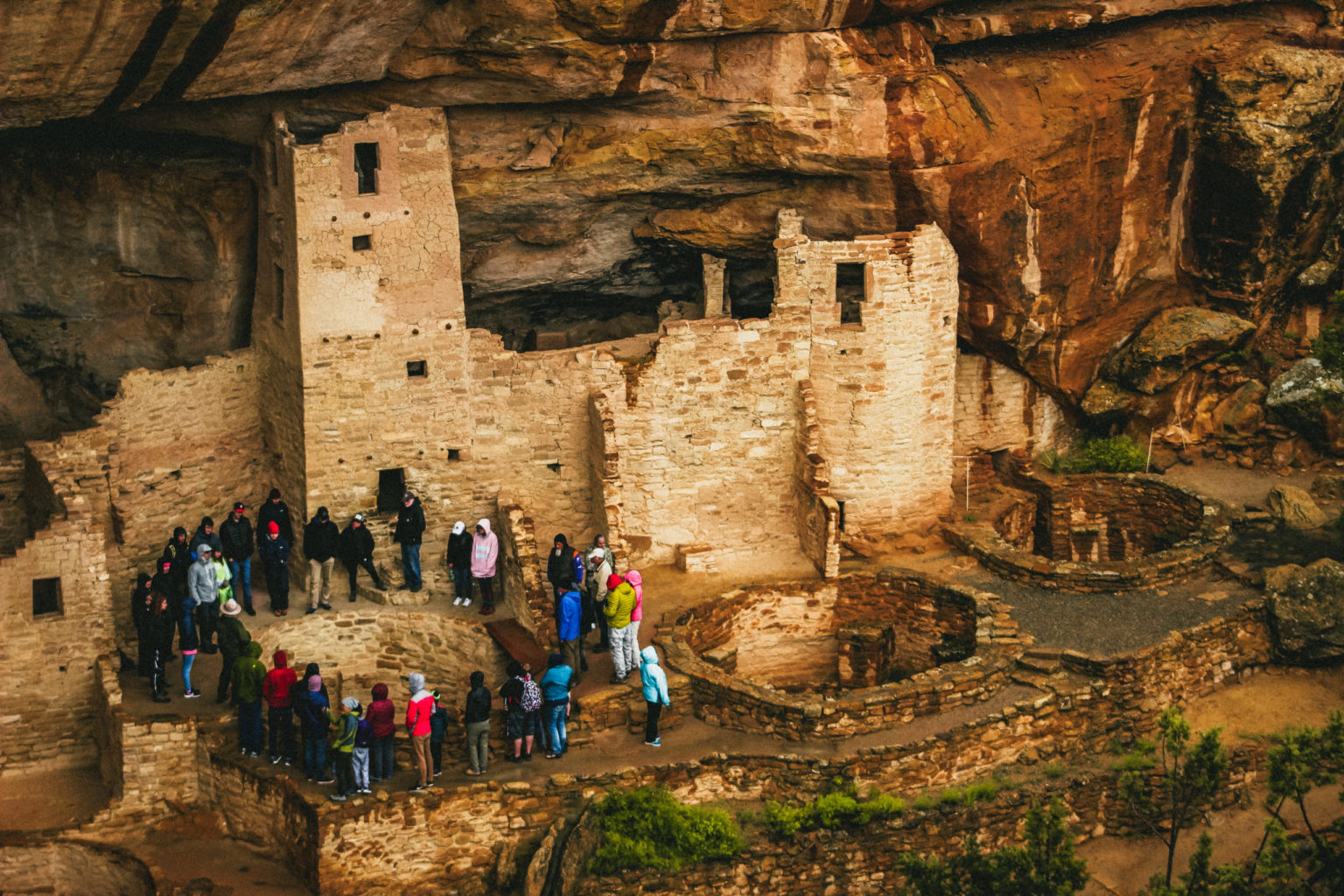 The reign of the Ancestral Puebloans is evident throughout the Southwest, as they left their same architecture from Utah’s Glen Canyon (now covered by Lake Powell) to Chaco Canyon in New Mexico. However, their incredible use of real estate in the Montezuma Valley has left one of the most significant marks in archaeology at large.

The cliff dwellings in Mesa Verde make up less than 10 percent of what these peoples built in the 13th century, per Archaeology Southwest. On top of that, these ruins are the largest of their kind on the continent, with over 600 villages nestled in the canyon walls and 5,000 sites scattered across the surrounding area.

But the creators of these palaces only used them for 80 years, and when they left, it seemed as if they’d be back. A few centuries later in 1888, a couple of ranchers rediscovered the ruins after chasing down a few getaway cows through the canyons, according to NPS. Inside these sandstone castles, they found countless relics. Fabrics, tools, food, pottery and baskets filled rooms and kivas like their owners would be back any minute. But it was apparent that when it was time for the Ancient Ones to move on, just about everyone got out of dodge at the same time.

Of course, the indigenous populations were already well aware of the cliff dwellings in Mesa Verde by the time white settlers came on the scene. These tribes respectively left the ancient city as it was, leaving artifacts in their resting place and the bricks intact. White folks didn’t seem to follow suit upon their rediscovery however, which thankfully sparked the Antiquities Act in 1906. This allowed Mesa Verde to be permanently protected as a National Park, and it was the first of its kind to, as Teddy Roosevelt put it, “preserve the works of man.”

Do You Really Need to Guide in Mesa Verde? 3 Reasons Why You Do