Southwest Colorado is remarkably special for a number of reasons, a large one being the spectacular geology of the San Juan Mountains. This 150-mile stretch of the Rocky Mountains has continuously imposed plenty of questions since scientists first started studying them over a century ago. As researchers continue to piece together the peculiarities of these peaks, they prove to hold complex backstories from basin to basin, from summit to summit.

The grandeur of the San Juans is evident in their looming fourteeners over glacially sculpted valleys. Making them was quite the process, but one that happened quite recently in terms of their age. Read on to learn about the geologic tales of the San Juan Mountains from an eagle’s eye view.

According to the Interactive Geology Project of Colorado, Colorado drifted to its current place on the globe 75 million years ago. At the time, geologically, it was a pancake. It was also part of the seafloor of the Western Interior Seaway— a massive channel that split North America into two islands for about 60 million years.

When the seaway retreated around 70 million years ago, a monumental uplift had already started to make gains in the area. The groundbreaking (ahaha) event was known as the Laramide Orogeny, and was responsible for kickstarting the creation of the Rocky Mountains.

During this time, a tectonic plate under the Pacific Ocean had shimmied itself under a North American plate. It’s presumed that the event lasted between 75 and 35 million years ago. As the seascape of Colorado quickly disappeared, the Laramide Orogeny left the area high and dry within 10 million years. Geologically speaking, that’s as fast as a jiffy! If not faster.

In fact, some areas of the Rocky Mountains are estimated to have been nearly 20,000 feet high at 60 million years ago, according to National Geographic. However, erosion and periodic shifts in the tectonics below would shrink these Western Himalayas as quickly as they came.

Laying Down the San Juans – Volcanoes 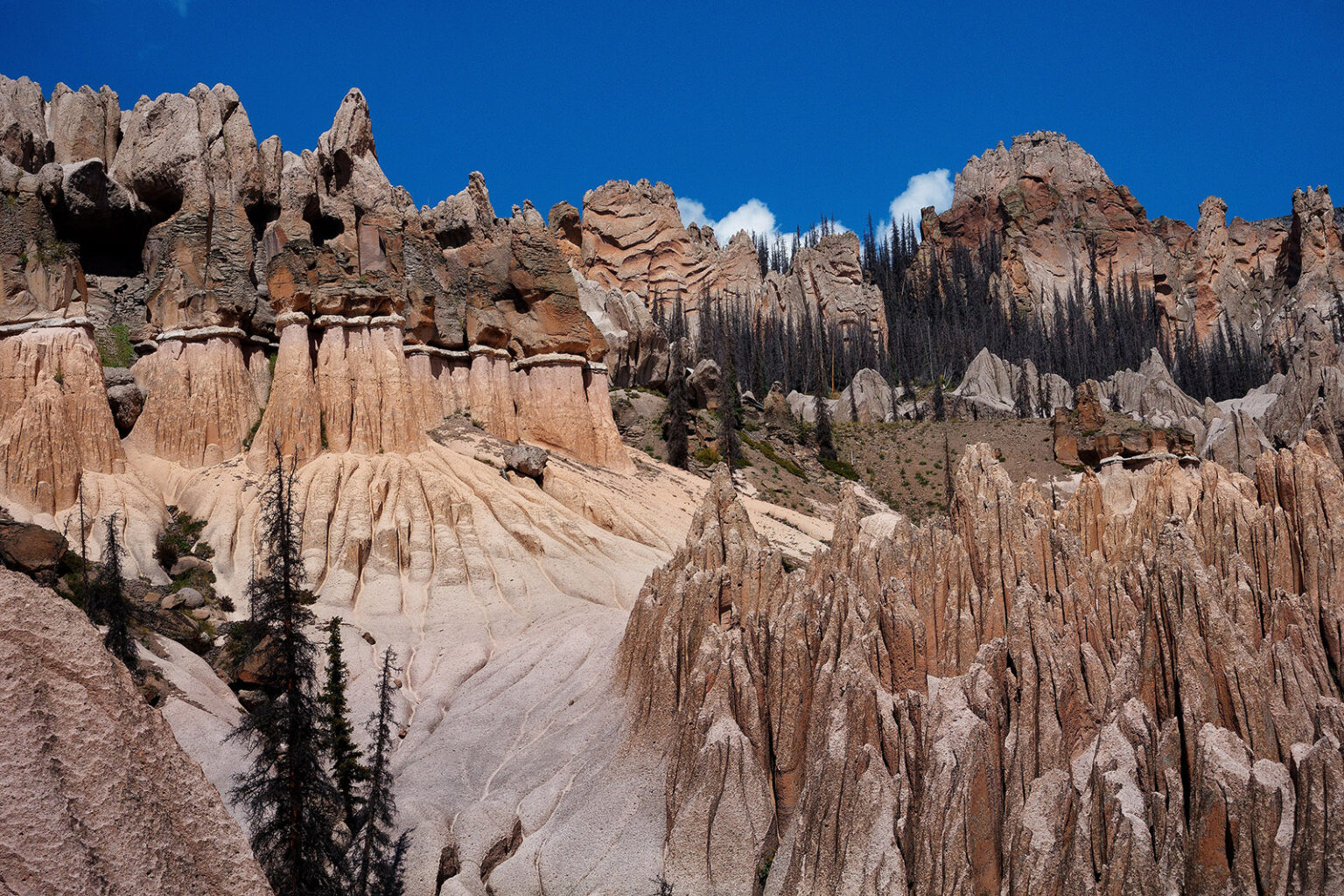 As the uplift of the Colorado Plateau was winding down, the magma below southwestern Colorado was preparing for one of the largest land-building events in history. Between 40 and 10 million years ago, enormous volcanic fields began popping off throughout the region, per Interactive Geology Project of Colorado.

As ash and lava flowed consistently out of these chambers for millions of years, things eventually started collapsing like dominos. Between 29 and 27 millions ago, 19 massive calderas formed across the steaming landscape.

Fun fact alert! The largest volcanic eruption on the planet occurred in the San Juan Mountains 27 million years ago, and became known as the La Garita Caldera. Its collapse was so large, that seven more eruptions and calderas occurred inside of it afterwards. Today the caldera is 22 miles wide and 62 miles long, and resides in the Rio Grande National Forest south of Creede.

A special remnant from this rumble down under is the Mother Spring in Pagosa, the deepest geothermal spring in the world. So, the eastern portion of the San Juans is doing pretty swell in terms of world records!

By 18 million years ago, the landscape was fairly flat again by the amount of lava and ash that covered the highlands. Evidently, this period wouldn’t last long thanks to a nice big stretch down in the lithosphere.

While Colorado was flowin’ it up with basalt, another major geologic shift to the south was underway in New Mexico. It was the Rio Grande Rift, which today runs from Colorado down to Mexico. This major divide in the landscape helped parts of the San Juan Mountains climb to their current elevation.

Rifts like this occur when a bulge of magma develops just below the Earth’s crust. Eventually the pressure builds, stretching the crust until it breaks— or faults rather. As the void deepens in the faults, the terrain on each side slides away from the widening fracture.

This rift added 9,000 feet of elevation to the San Juans. Ironically, while the event contributed to the building of the mountain range, it may eventually swallow them someday. The mountains in New Mexico were much like the San Juan in the prime before the Rio Grande Rift, per National Geographic.

Rifts act like a zipper, so once the landscape is cracked open, it continues opening along the initial fault lines. Also, since the rift is so tectonically active (to the point where helium in the mantle bubbles up from it in some areas), it could eventually split the continent in two!

Shaping Up — Rivers and Glaciers

While the rocks of San Juan Mountains were created by magma spewage for tens of millions of years, their actual shape came about pretty recently. And you can probably guess what’s to thank for the bowed valleys and conic peaks of this unique range… Tremendous ice cubes.

Earth’s last major ice age started only about 2.6 million years ago. We’re actually still in the Ice Age today, although North America isn’t nearly as inundated with glaciers as it was just 13,000 years ago.

One of the largest glaciers that sliced the valleys of the San Juan Mountains was in the Animas River Valley from Silverton to Durango, per the US Forest Service. The river that flowed from this ice plug, along with the San Juan River, delivered a cocktail of sediments into a southern plain known today as the San Juan Basin.

Thanks to the thousands of feet of layers that filled this depression through the eons, the San Juan Basin is now the largest coal bed methane-field on the planet.

Treasure from the Tertiary – Silver and Gold

In the mid-1800’s, miners began discovering precious metal reserves weaved within the San Juan Mountains. Silver, lead, zinc and sometimes gold are fundamentally what modernized this rugged swath of the Rockies.

Silver and gold are particularly special because they arrived on Earth during its initial creation. While other precious metals become so during a process underground, these expensive metallics are created during supernovas. When stars explode, their neutron-heavy materials (along with everything else in the star) go flying across the universe.

Eventually, those metals slam into other space stuff floating around in the final frontier. So, as cosmic projectiles mashed the Earth together 4.5 billion years ago, gold and silver also showed up for the shindig. Fast forward to 40 million years ago when Colorado began throwing a massive fit of volcanic eruptions, metals that were once floating around in the magma were delivered to the surface.

Upon meeting the Earth’s outer layer, they eventually dispersed in ore deposits within the rock structure. The estimated value that was once buried within the San Juan Mountains is $300,000,000, according a geologic survey from the Department of Interior. Not too shabby for this rough and rugged neck of the woods.

5 Amazing Off Roading Trails in Southwest Colorado to See Wildflowers