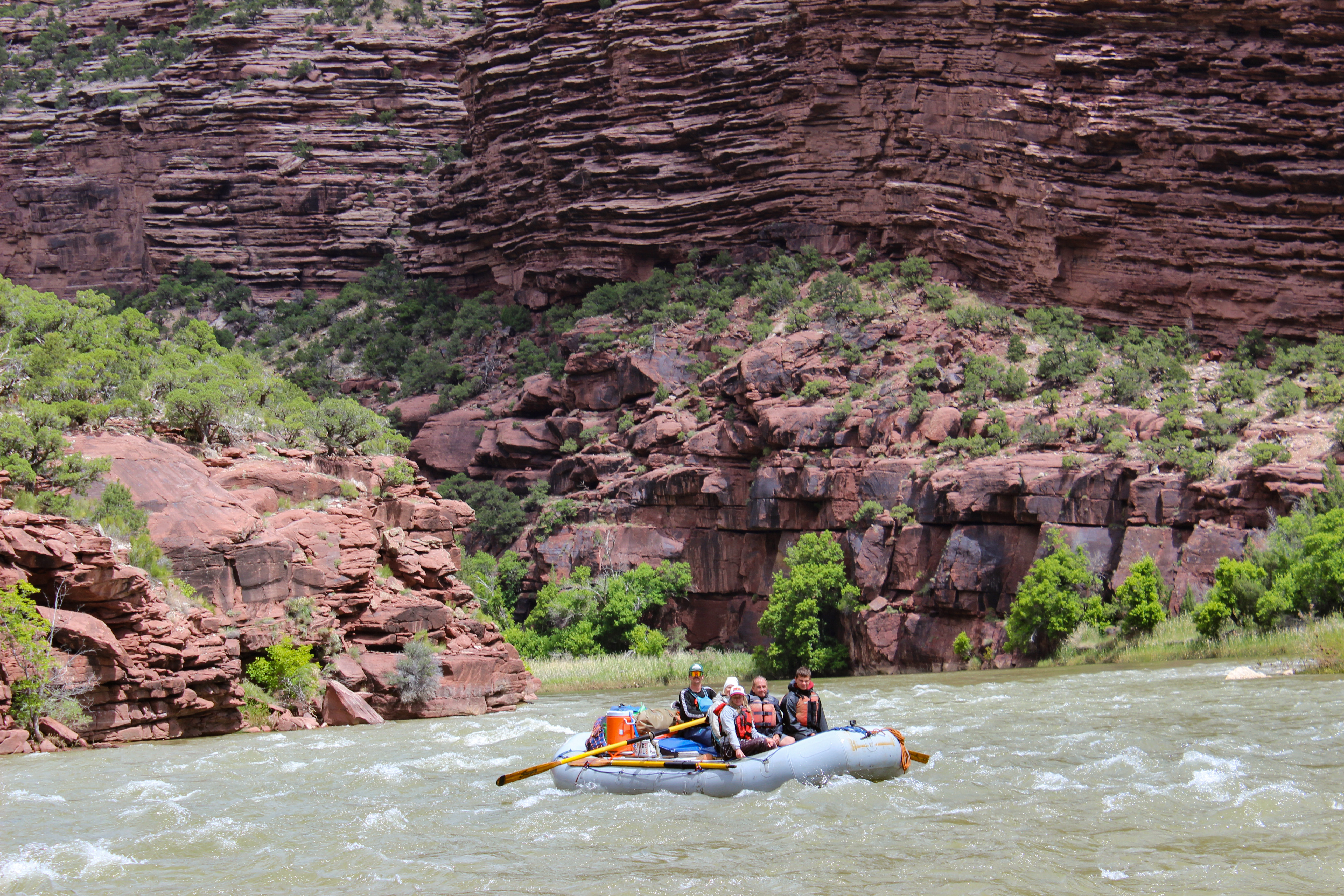 The Green River is an ancient artist. Continually it sculpts, amplifies, and reveals the magnificence in the geology of Lodore Canyon. Within these billion-year-old walls is a display of prehistoric tales in the sheets of changing stone and stoic illustrations from ancient storytellers.

As you float and splash along the Green River, you’ll share the same path as explorers from a vastly different time. Many have worked, played, and lived within these gargantuan geologic curiosities jutting in every direction imaginable. Here’s a slice of explanations for the immense memorabilia that surrounds, towers, and encapsulates Lodore canyon. 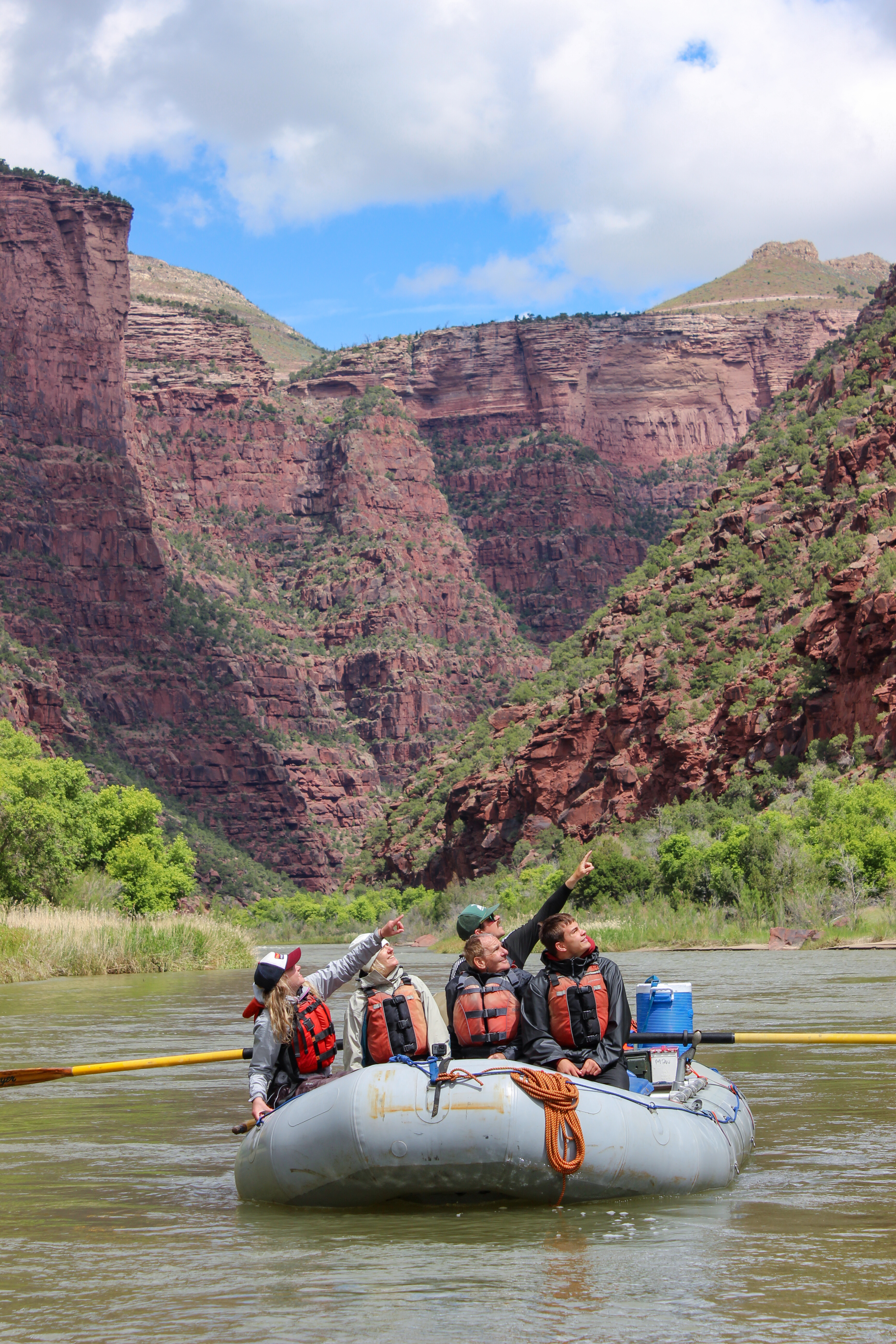 Uinta comes from the Weber Ute Band of Shoshoni Native Americans, derived from Yoov-we-teuh, which means pine tree or forest.

Lodore Canyon is in the southeast section of the Uinta Mountain group, the highest east to west mountain range in the contiguous U.S. The Uintas are the Rocky mountains’ wild child or annoying little brother – the Rockies came before the Uintas, and they’re related because they were created under the same geologic circumstance. 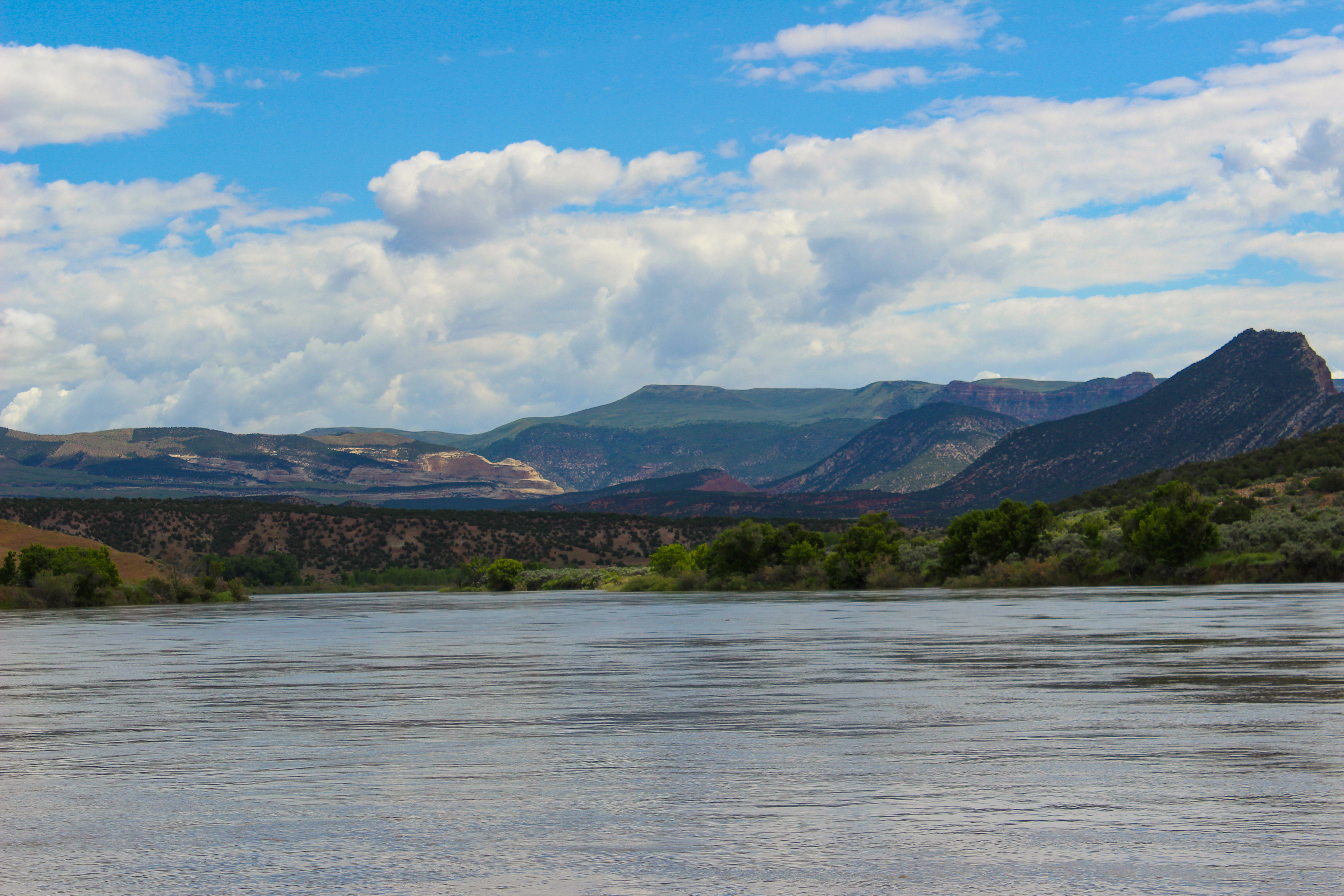 This circumstance called the Laramide Orogeny lasted between 70 and 40 million years ago, when an oceanic plate nudged itself under a North American plate. This caused a lot of pressure between the new tectonic roommates, resulting in an uplift known as the Colorado Plateau. During this time, Utah and Western Colorado were a series of large basins where the Uinta Mountains rose up.

During their millions of years of growing pains, rocks tend to be fickle in their movements. Some shifted between fault lines in a vertical frolic, while others were squished on their sides in a diagonal dance. This made the lively, multi-directional forms that summon constant neck-craning today in Dinosaur National Monument.

“Away to the south, the Uinta Mountains stretch in a long line; high peaks thrust into the sky, and snow-fields glittering like lakes of molten silver; and pine forests in somber green; and rosy clouds playing around the borders of huge, black masses; and heights and clouds, and mountains and snow-fields, and forests and rocklands, are blended into one grand view.” 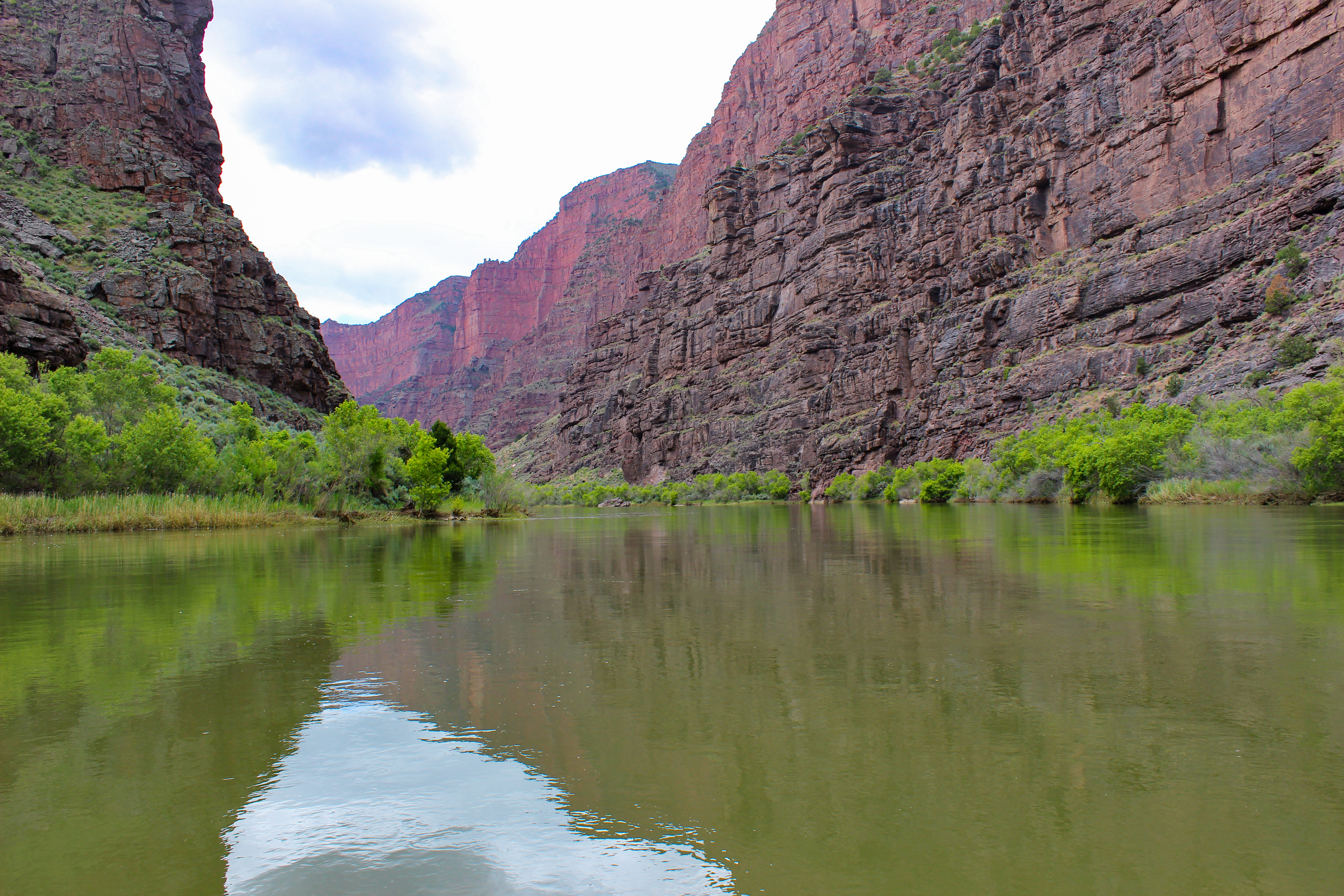 Thanks to the Green River, we can gaze upon 23 exposed rock layers throughout Lodore. What’s unique about this canyon is a chicken and the egg situation. Usually, rivers take the easy way around and out of mountain ranges- not that we’re judging them for it, it’s just the usual pattern we see.

But the Green is a trailblazer, strutting its meander right through the Uinta Mountains. It puzzled John Wesley Powell, who thought the river could have possibly flowed before the peaks formed. It was a pretty good guess for the time, however, the Green River’s origins are still in debate. Many theorize it most likely seeped from an ancient basin in Brown’s canyon before the last major uplift of the Uintas.

These massive scarlet-hued doors greet you at the boat launch to enter Lodore Canyon. Standing at 2,000 feet tall, the Gates soar into blue atmospheric haze like romanticism. 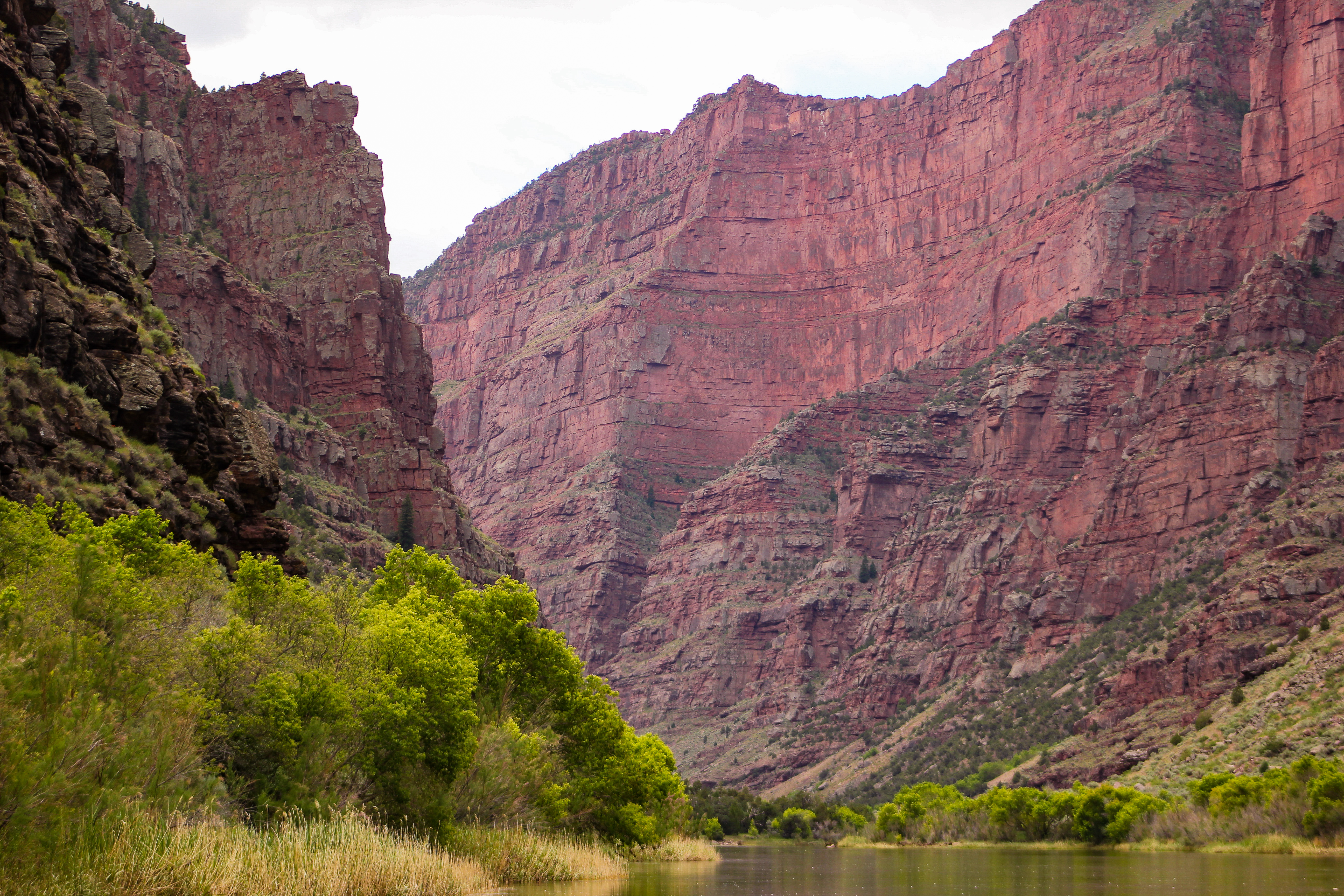 The Gates were named on Powell’s first expedition in 1869 after the poem, “The Cataract of Lodore,” by Robert Southey, from 1820. Southey wrote these animated verses based on a waterfall in Watendlath, England for his children. Here are the last five lines of the poem:

And so never-ending, but always descending,

Sounds and motions forever and ever are blending

All at once and all o’er, with a mighty uproar, –

And this way the water comes down at Lodore.”

This area used to be a rich forest filled with wide rivers 150 million years ago. Sauropods, theropods, and many other dinosaurs partied on these plains while Pangea split into separate continents. Their bodies were buried in what has been named the Morrison Formation.

The Morrison Formation is a conglomerate of sediment that quickly covered 600,000 square miles from Montana to New Mexico. You can spot it by its purple and white striped rocks throughout the West. Its prompt deposition has preserved some of the best fossils found in North America. Dinosaur National Monument has been dedicated to preserving fossils since 1915, after paleontologist Earl Douglas had his first discovery here in 1909.

Once you’ve drifted a few miles into Dinosaur National Monument, you’ll be greeted by a series of gushing emerald rapids. After tossing around and out of Hell’s Half Mile, you’ll float to the confluence with the Yampa River in Echo Park.

Here on display is a slick, soaring wall known as Steamboat Rock. This mile-long block of blonde Weber sandstone stands at 1,050 feet. Its tall, skinny structure was chiseled by an entrenched meander.

Entrenched meanders occur when the land lifts against the existing exaggerated curve in the river, meaning the river had already made its mega-meander when the land was flat. 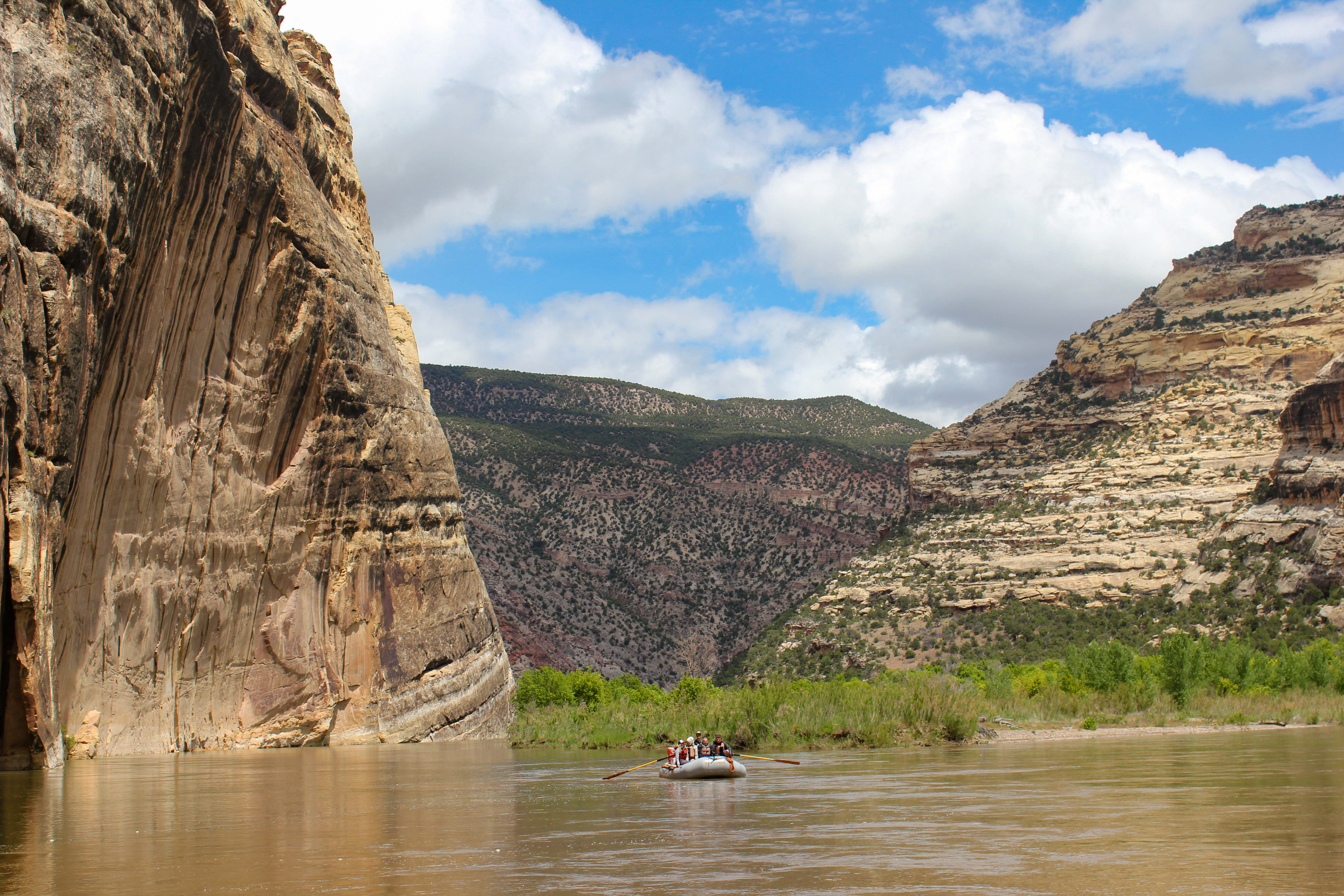 John Wesley Powell climbed this monolith with his chief boatman, George Bradley, during a survey outing in 1869. Powell, who had lost his right arm in the Civil War, came to a spot where he was unable to go up or down on the rock face. Luckily, his fellow veteran came to the rescue. Here’s a line from Bradley’s journal entry about the life-threatening incident.

“Major, having but one arm couldn’t get up so I took off my drawers and they made an excellent substitute for rope and with that assistance, he got up safe.” 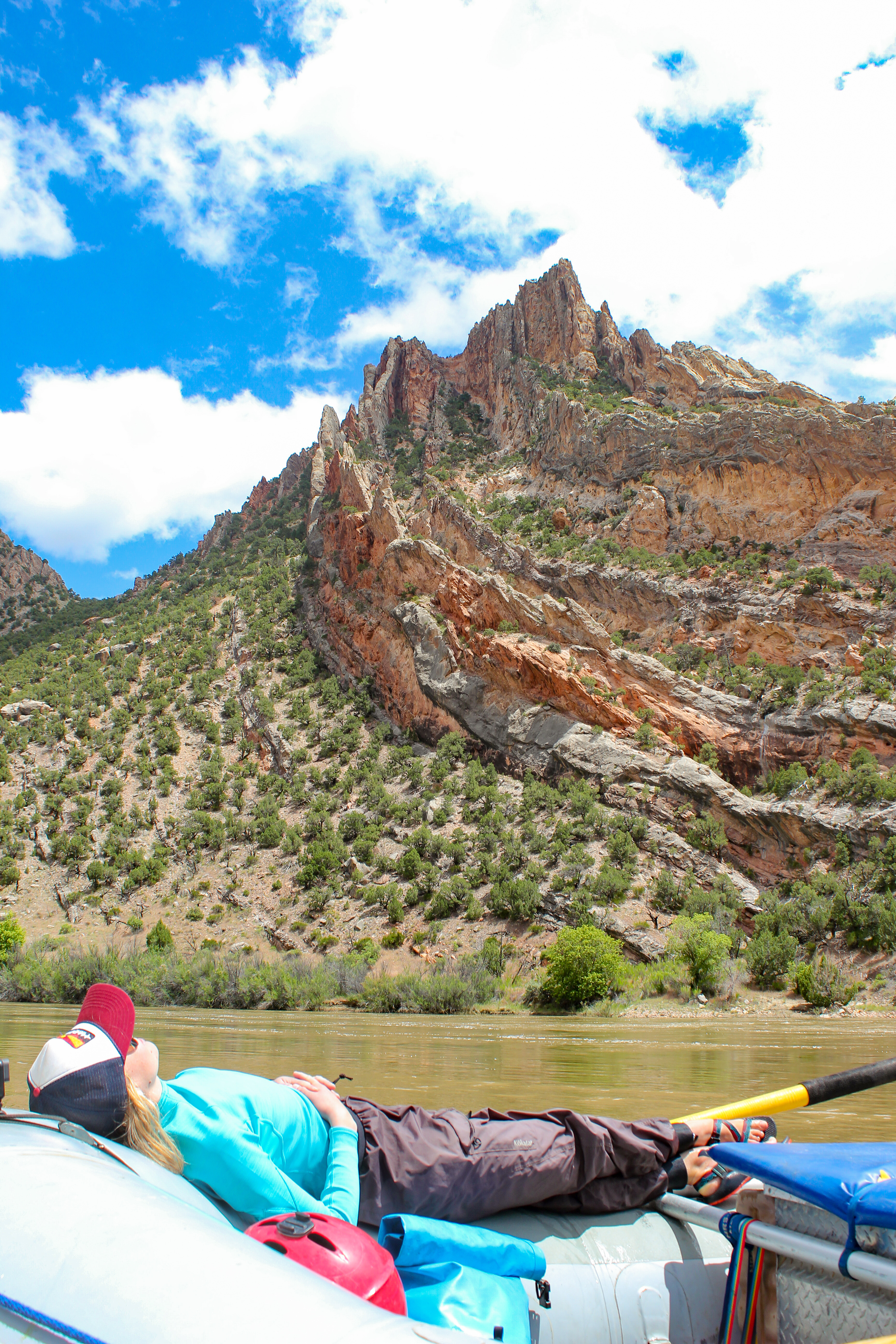 Just around the west side of Steamboat Rock is the miraculous Mitten Park Fault. This multicolored wonder made from faults and folds sweeps right out of the Green River.

The curve in this formation is called a fold. Folds form when rock layers endure slow, steady pressure. They bend in a beautiful resistance creating the arcs in Mitten Park. 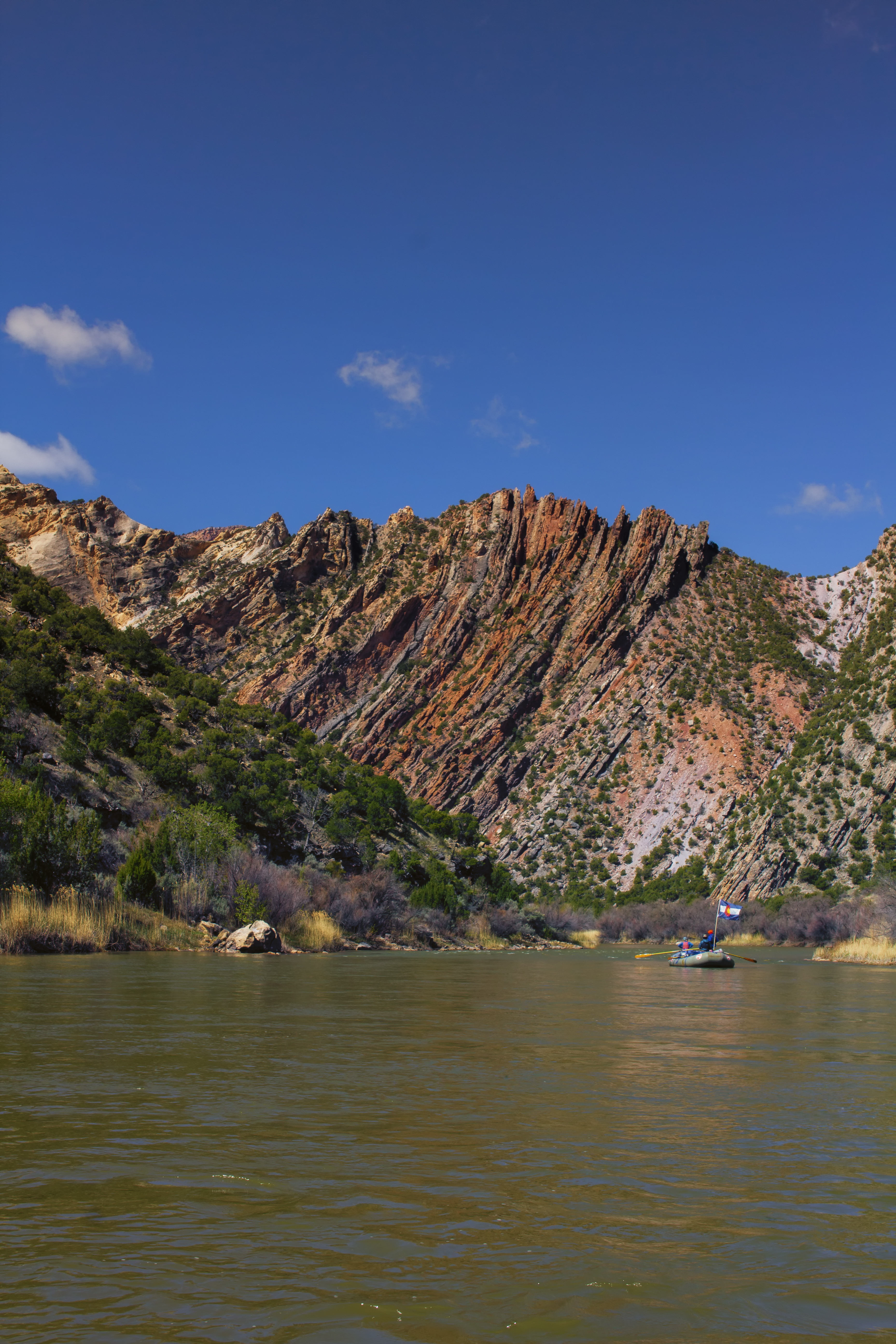 Besides these folds is a significant fault line. Faults form when compression occurs in the crust and cracks, creating a fracture line. One side of the fault will move upwards while the other is usually shoved in the opposite direction. This is called drag, which is exemplified beautifully on either side of the river of the Mitten Park Fault. 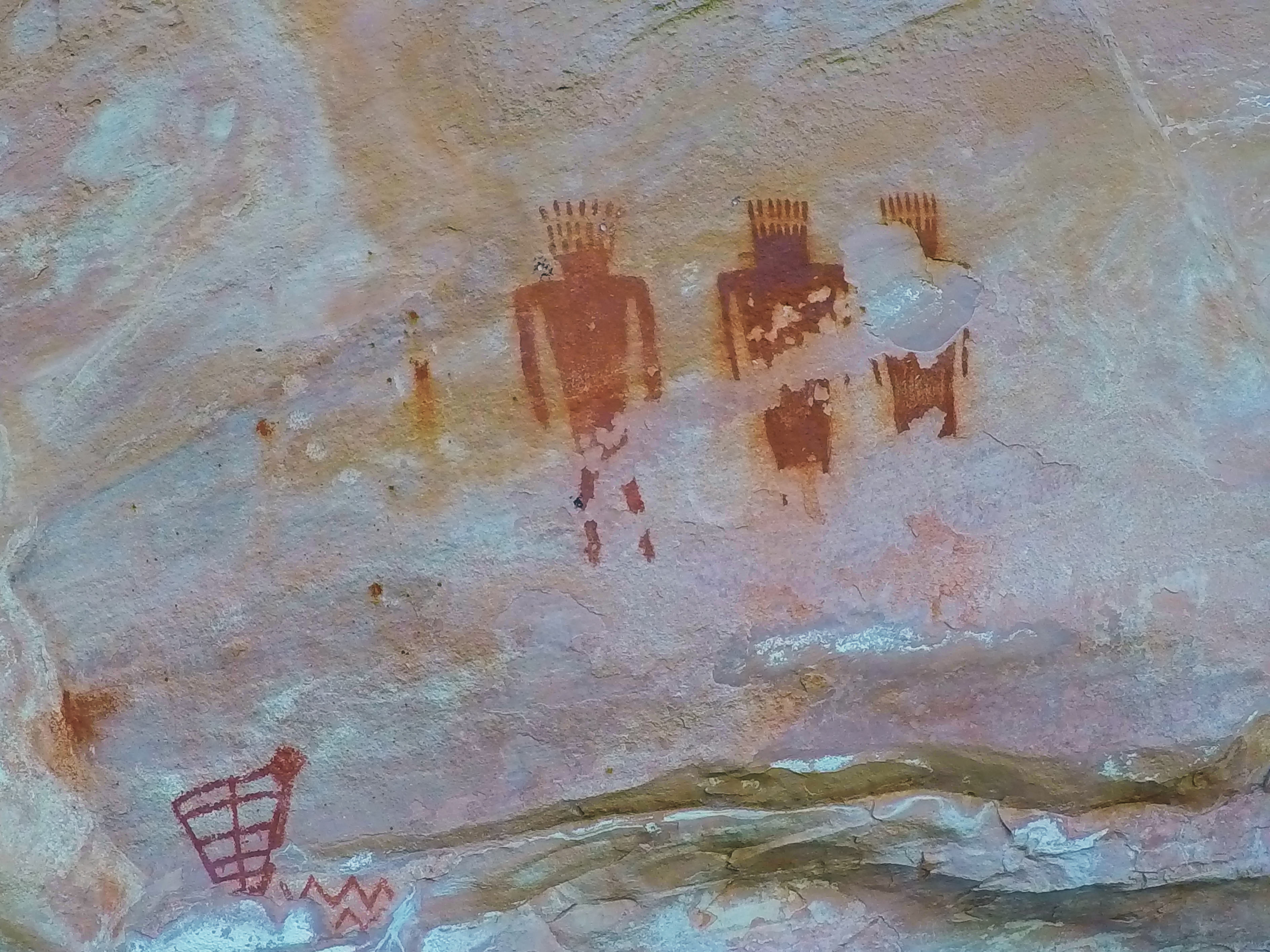 Throughout the drift, various petroglyphs and pictographs can be spotted right from the river, or on peaceful hikes like on Jones Hole Trail, right after the Mitten Park Fault. They are a constant reminder of the ancestral artists who prospered in these canyons thousand of years ago.

The Paleo-Indians were a nomadic group living in and around Lodore canyon about 10,000 years ago. They gathered wild shrubs in between successful hunts for mammoths and camels.

The Archaic age followed around 6,000 B.C. Archaics led a more sedentary lifestyle with less meat and more beetroot in their diets. They moved with the seasons, camping in higher elevations in the summer to trap game, and in the canyons during the fall to collect nuts and berries. Try a couple Netleaf Hackberries, they taste just like sour candy. 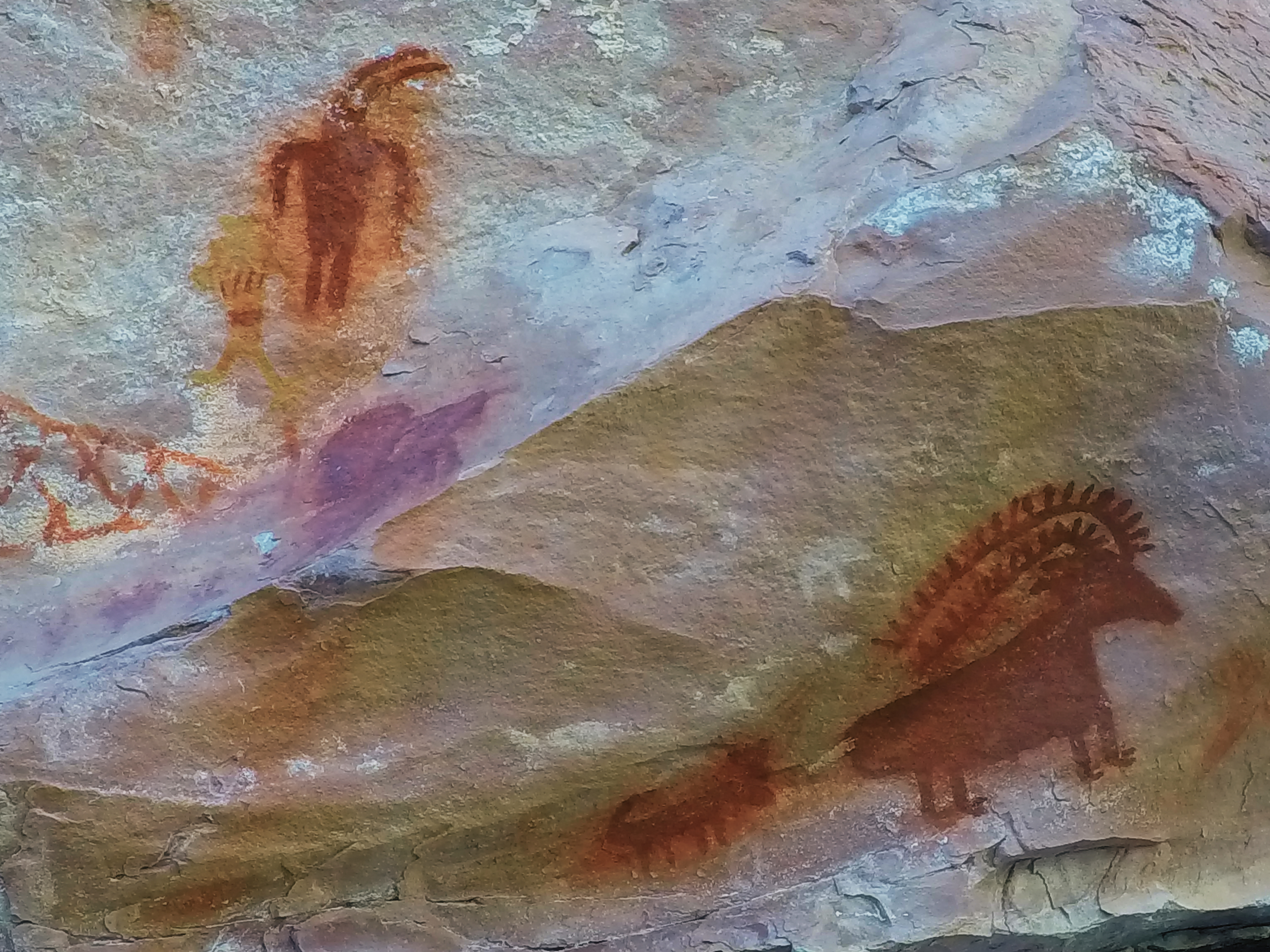 Horticulture became the name of the game by the Fremont people over 2,000 years ago lasting until 1250 A.D. Fremont folks left a plethora of granaries and imaginative petroglyphs and pictographs throughout the canyon. Their departure probably occurred after a drought encouraged them to part ways with the Green River. 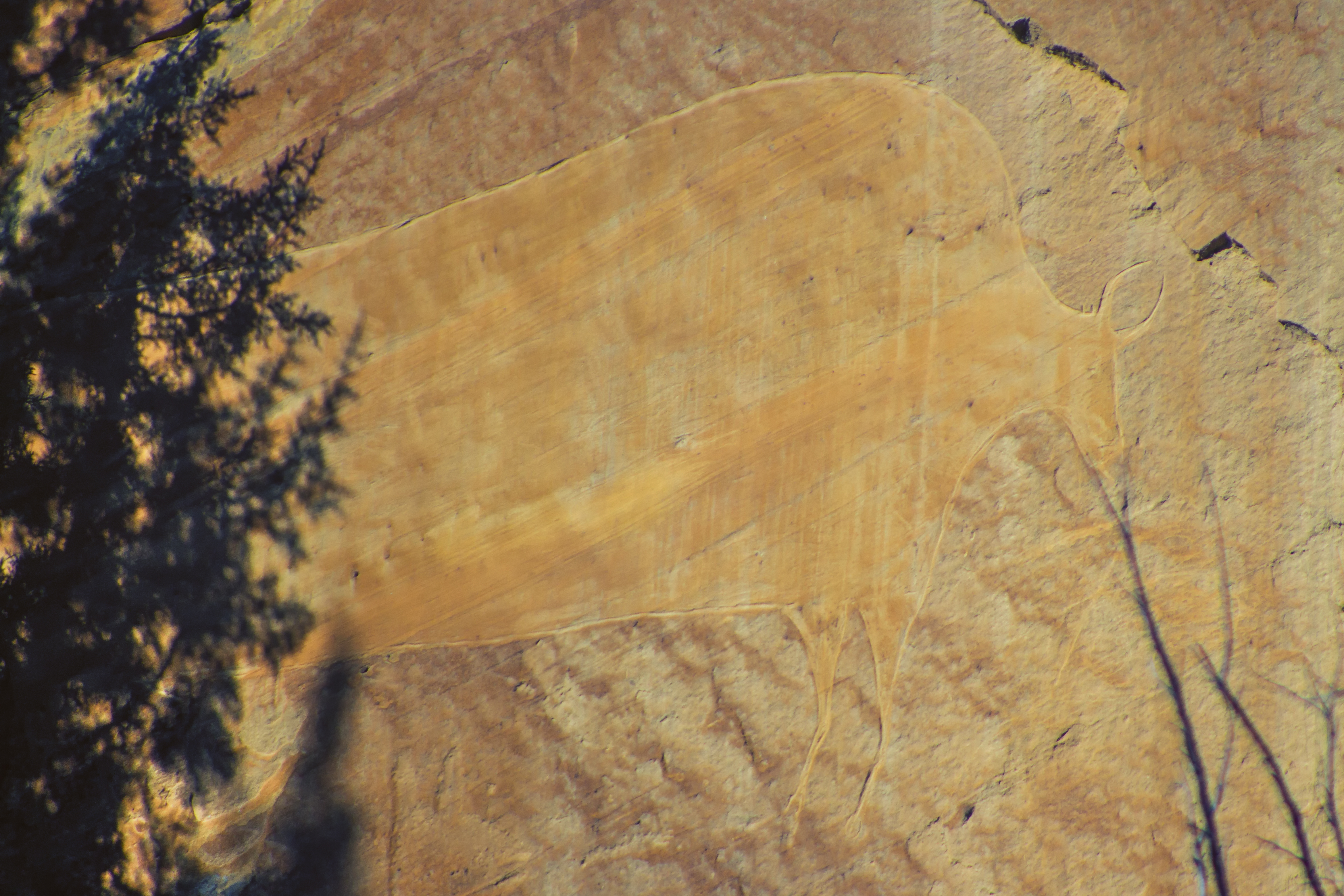 Shoshone and Ute groups traveled from what is currently known as Baja, California and settled here after the Fremont culture. Remnants from their dome-shaped homes known as wickiups are still found in Dinosaur National Monument.

Friars Atanasio Domínguez and Silvestre Vélez de Escalante lead a European expedition into the Uinta Mountains in 1776. They met Ute tribes who would later be pushed out due to Mormon settlers and the Federal Government, leaving them with a reservation in the Uinta Basin in 1882.

John Wesley Powell and his men weren’t the only explorers in Lodore canyon during the 19th century, nor were they the first professional expedition.

A beaver-hunting bunch known as Ashley’s Hundred began their journey on the Green River in Wyoming in 1825. The Rocky Mountain Fur Company employees traveled downstream in bull boats, which were makeshift canoes tied with tree branches and buffalo hides. Here is an entry from Ashely’s journal just after they reached Lodore canyon- most likely succeeding what is known today as Disaster Falls.

“May 10th Mended our canoes which had received considerable injury yesterday and proceeded down the river – at a distance of 2 miles the river became so very bad that we were unable to proceed with our canoes loaded – we discharged them and performed a portage of half-mile which in consequence of the roughness of the side of the mountain, along which we were obliged to pass made it extremely difficult and tedious – these may be well called the Rocky Mountains for there is nothing but mountains of rocks to be seen partially covered with a dwarf growth of cedar & pines – violent wind with snow & rain.”

Josie Bassett Morris, born in 1874, was a rancher who lived most of her life along the Green River. She had five marriages and befriended— perhaps canoodled—  outlaw Butch Cassidy and the Wild Bunch. The cabin she built in 1913 still remains in Cubs Creek, along with a chicken coop and other homesteading doodads.

“I thought he was the most dashing and handsome man I had ever seen. I was such a young thing, and giddy as most teenagers are, and I looked upon Butch as my knight in shining armor,” Josie said about Cassidy in 1960.

Bus Hatch was a carpenter and downright river enthusiast who fashioned his own wooden boat to run the Green River in 1929. Utahns and Coloradoans soon had had enough fomo (fear of missing out), and were paying him to barrel down the Green in rickety vessels loaded with shotguns and whiskey. 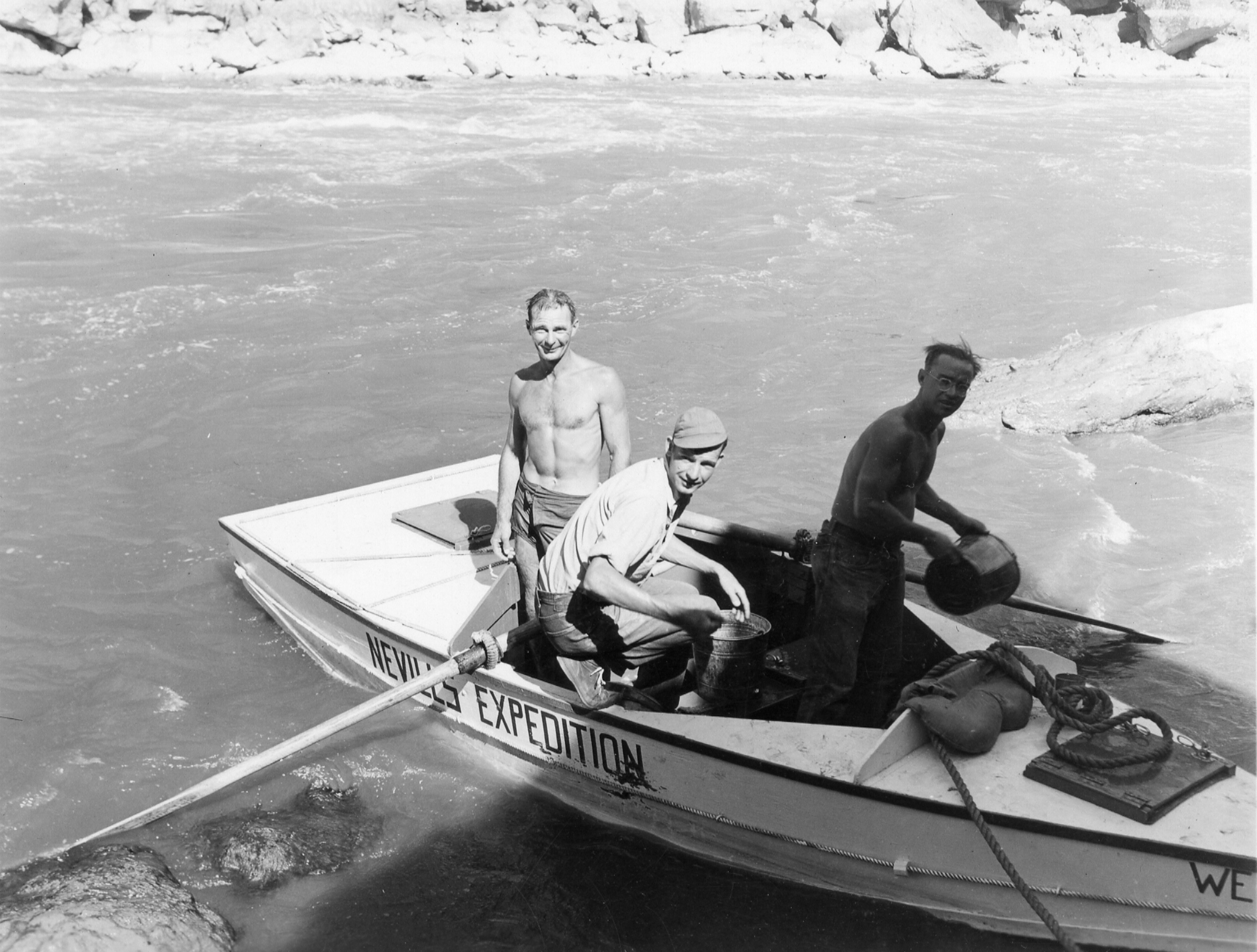 Shortly after pioneering the first commercial rafting company, the Hatch family purchased a couple of military pontoon bridge boats from WWII. This kickstarted the rubber raft movement that was adopted by every rafting company thereafter. Hatch River Expeditions is still joyously running rivers today through the Grand Canyon. 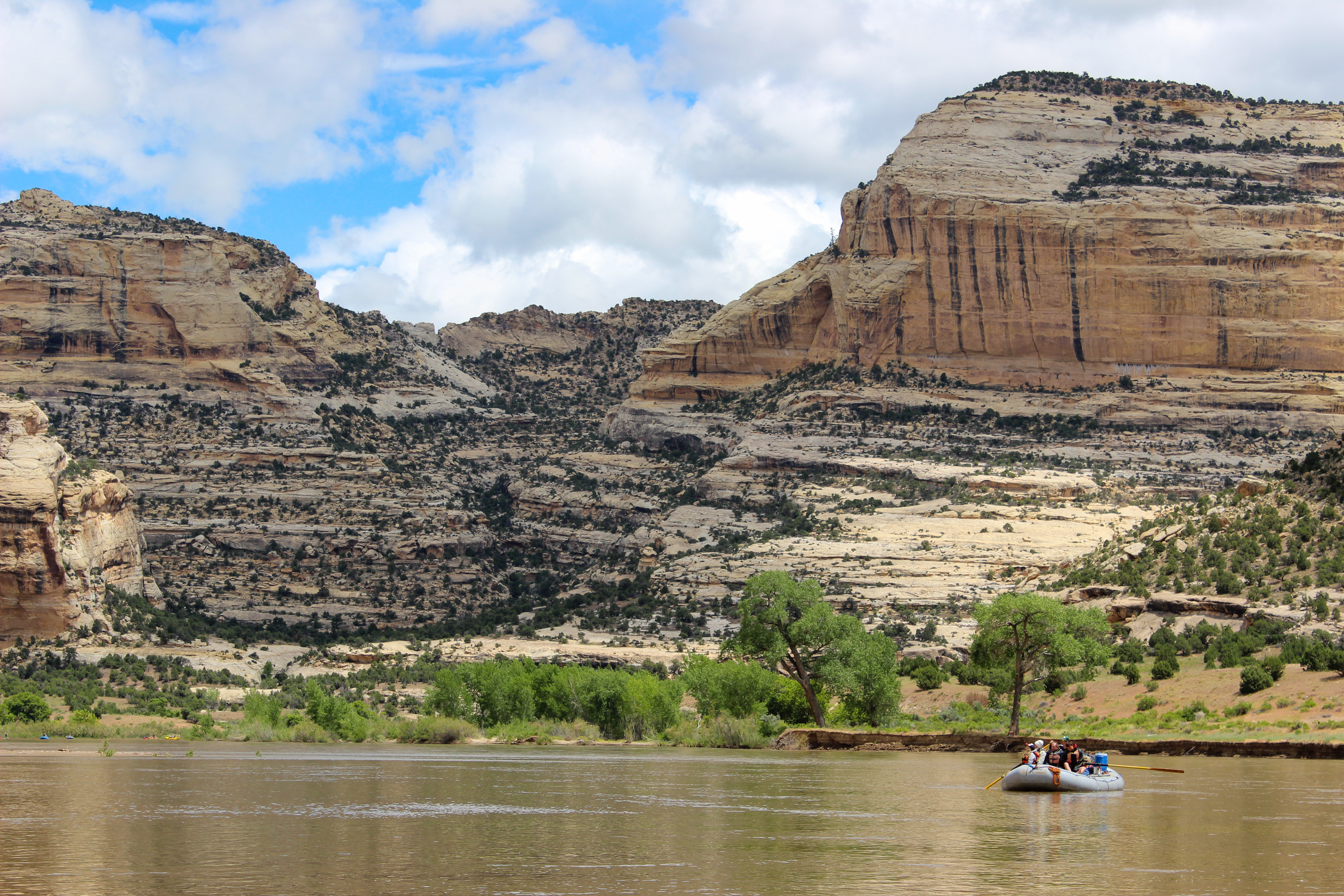 The beauty, grandeur, and antiquity of this canyon is enchanting beyond measure. Choosing to meet these billion-year-old structures in person will deliver a wealth of insight and wonder of Earth’s long term schemes. Lodore Canyon invigorates our curiosity, and propels our appreciation for the rare and stunning sights within its rift. Take a trip on this section of the Green River, and you’ll come back with more stories and explanations about Lodore than you can probably retain.

What’s So Special About the Gates of Lodore?

What to Pack for Your Utah Rafting Adventures