National parks, a collection of federally preserved lands often coined as “America’s greatest idea.” Indeed, these parks are magnificent to behold with their breathtaking scenery, spectacular wildlife, and refreshing disconnect from busy and bustling cities.

Every year millions of American citizens, as well as travelers from abroad, visit the 62 national parks strewn across the United States. They come in search of purpose and meaning, and they come to see the awesome variety of landscapes that nature has spent carefully crafting since the dawn of time. And most of these visitors leave invigorated with a newfound sense of purpose and appreciation for the grand world they live upon.

For some, however, their stories of the national park system did not have a happy ending. Their visits to national parks concluded with expectations crumbled, love lost, and deeply bored children. And how, you may be asking, do we know of this distraught? We know because of a remarkable service known as Yelp, which provides a platform for these disgruntled visitors to tell their stories to the world. And now, we shall take a dive into the dark depths of Yelp’s one-star reviews of the United States’ most popular national parks.

Our story begins with the fifth most visited national park of 2019: Yosemite. Founded in 1864, this California park is beloved for its stunning waterfalls, hiking and climbing opportunities, and endless jaw-dropping views. It’s also on the back of the California quarter! So yeah, Yosemite is generally thought pretty highly of.

One yelp reviewer, however, had a slightly different opinion.

Not getting to see any bears does sound pretty lame, David. Based on your review, one might go so far as to suggest your trip to Yosemite was unBEARable.

Zion, Utah’s first national park, was established in 1919 and was the fourth most visited park in 2019. People come to the park from far and wide to see the brilliant colors of the Zion Canyon walls as they hike, bike, or climb. Those who come to Zion also come to absorb the rich history of native people and pioneers who once roamed the land as well as to see the variety of animal and plant life that resides there today.

Although Zion sounds like an oasis of stunning scenery and knowledge that anyone would enjoy, one guest had something a little less positive to say about their experience.

It’s certainly an interesting choice to start off a one-star review by describing the location being reviewed as “majestic.” Then there’s that peculiar section of actually requesting a higher entry fee to get into the park. However, if we had to pick out my favorite detail, we’d have to go with the shuttle recording as “monotone and a little depressing.”

Certainly it’s true that our national parks are going through periods of change as visitation rises. We personally think it’s okay to pave the popular paths to help more people get the chance to see these natural wonders with limited degradation of the landscape. While the announcements on the shuttle may have come across as monotone, we applaud the National Park Service in their actions to reduce congestion and greenhouses gasses in the park.

In January of 1915, President Woodrow Wilson signed the Rocky Mountain National Park Act to preserve the epic Colorado landscape sitting at 12,000 feet above sea level. Some highlighted keywords and phrases in most reviews of Rocky Mountain include “beautiful,” “stunning,” and “anything less than a 5-star review would be criminal.”

With all that in mind, let’s bring our next review to the stand.

This blog’s pattern dictates that we should make some sarcastic commentary on this review, but we don’t think that’s necessary in this case. Yeah, we think it speaks for itself pretty well. Given how outlandish this review is, we suspect this is probably a joke review. At least we hope that’s the case. Either way, let’s move on.

We think it’s safe to say that the Grand Canyon might be the most well-known national park in the United States. we mean, you can see the darn thing clear as day from space. It’s certainly up there with the most impressive geographical statistics: 277 river miles long, up to 18 miles wide, and a mile deep at its lowest point. With those factors in mind, it’s easy to see how the Grand Canyon got its name.

As you may have guessed, there are some out there who found their experience at this park to be anything but “grand.”

First, we’d like to say that the Grand Canyon has an immense collection of fantastic one-star reviews, all of which are lovely reads. However, what makes this review stand out is how it combines its hostile criticism of the national park with aggressive praise of the crab “enchilados” at a nearby Mexican restaurant. Plus, the pun at the end serves as a simply divine capper to this high-energy review.

If you ask us, dirt and hiking trails sound like the perfect escape, but you can’t please everyone.

And now we come to the Great Smoky Mountains National Park, the United States’ most visited national park according to the National Park Service. Established in June of 1934, this park is renowned for its diverse wildlife and beautiful mountains dense with hiking trails, waterfalls and historic sites. A natural paradise for anyone who appreciates the wonder of the great outdoors.

As we’ve seen with the reviews above though, not all find paradise worthy of 5-stars. And so, with that, we present our final one-star review for the United States’ most popular national park. 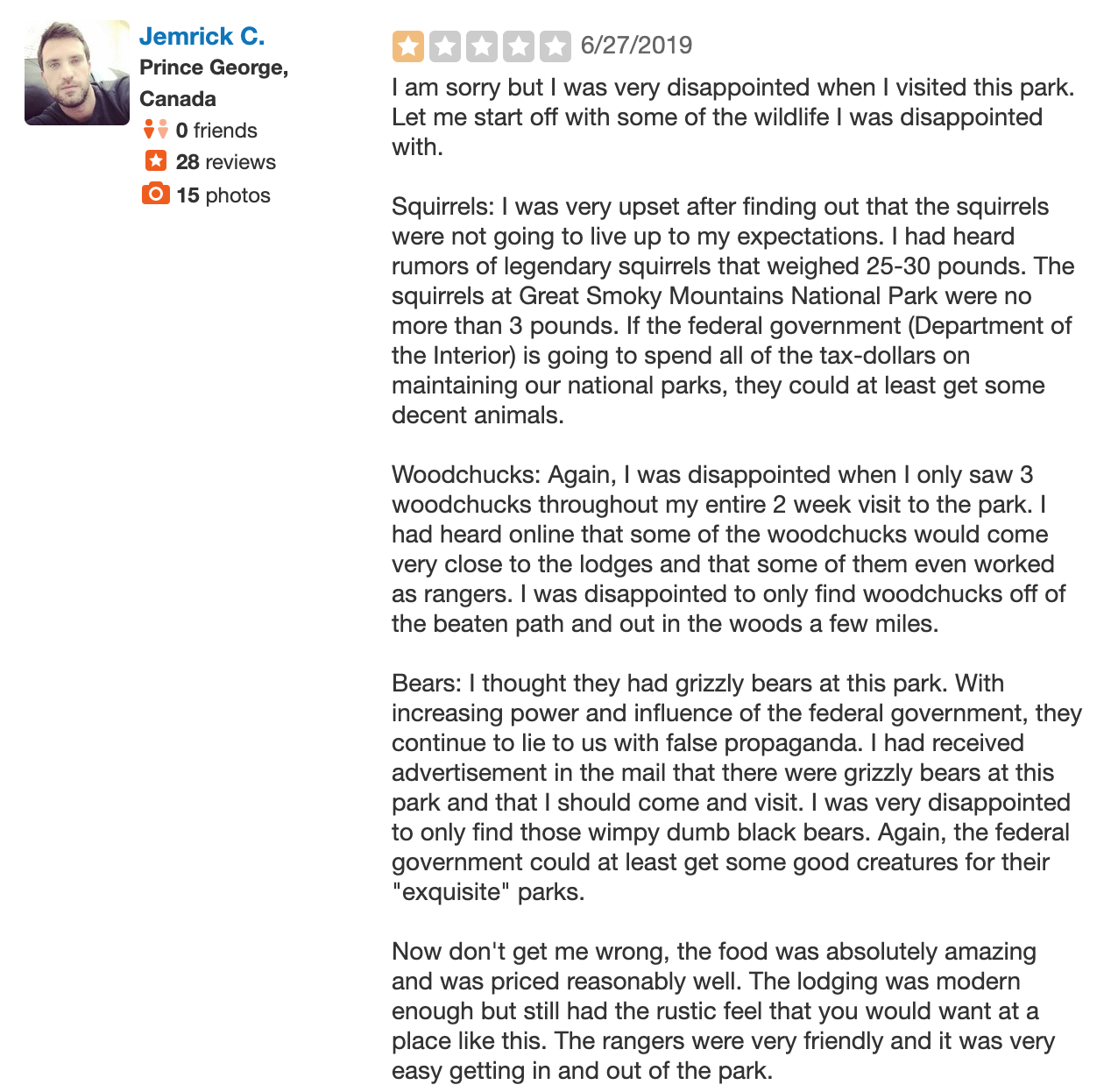 As was the case with the Rocky Mountain review, we strongly suspect this was intended as a joke review. However, we do love the idea of someone coming to a national park with genuine expectations of seeing 30-pound squirrels. Let’s just go ahead and give the reviewer the benefit of the doubt though, and praise the humorous review.

And that’s it for our favorite one-star reviews of the United States’ top five most visited national parks. We hope you had as much fun indulging in their absurdity as we did!

What is a Dark Sky Park, and Why You Need to Visit One

Things to Do & Activities in Moab