Have you ever wondered what kind of games you can play with kids while you’re rafting? Sure there’s plenty of games to play once you’re off the river in camp, but what about while you’re in the boat? When you’re on the river for long stretches at a time, it’s great to break out some additional entertainment. After all, there’s a lot of down time in between rapid runs and refreshing swims on multi-day rafting trips. Check out these fun games to play with kids while you’re on the raft!

Riddles are a great way to play and pass the time while enjoying the scenery. Plus, the kids will feel so rewarded when they figure them out! Here’s a few river themed riddles to stow away for when you’re floating down the canyon:

Two penguins paddling a canoe in the sand on a deserted island. One says to the other one, “Wears your paddle.” The other one says, “Sure does.” How does the second penguin’s response make sense?

Highlight for the answer ➡️ The sand is wearing the paddle down.

What has a bank that doesn’t store money, has a bed but never sleeps, and has a mouth but never eats?

Highlight for the answer ➡️ A river.

You see a boat filled with people, yet there isn’t a single person on board. How is that possible?

Highlight for the answer ➡️ They’re all married.

A man calls his dog from the opposite side of the river. The dog crosses the river without getting wet, and without using a bridge or boat. How?

Highlight for the answer ➡️ The river was frozen.

I have lakes with no water, mountains with no stone and cities with no buildings. What am I?

Highlight for the answer ➡️ A map.

Alphabet Game with Nature instead of Road Signs

River trips make this classic game a little more interesting since there aren’t usually any words (or signs of any civilization for that matter) waiting along the banks to help you move through the letters. Instead, just use what the wilderness has to offer.

As a refresher to this classic car game, when someone sees a sign that starts with a letter, the other players have to find the next letter in alphabetical order to keep playing. So, on a river trip for example, if you see a heron, call it out and then somebody else has to find something with an “i”, then a “j” and so on. This one will definitely get you thinking, and is a great game to casually play throughout the day. 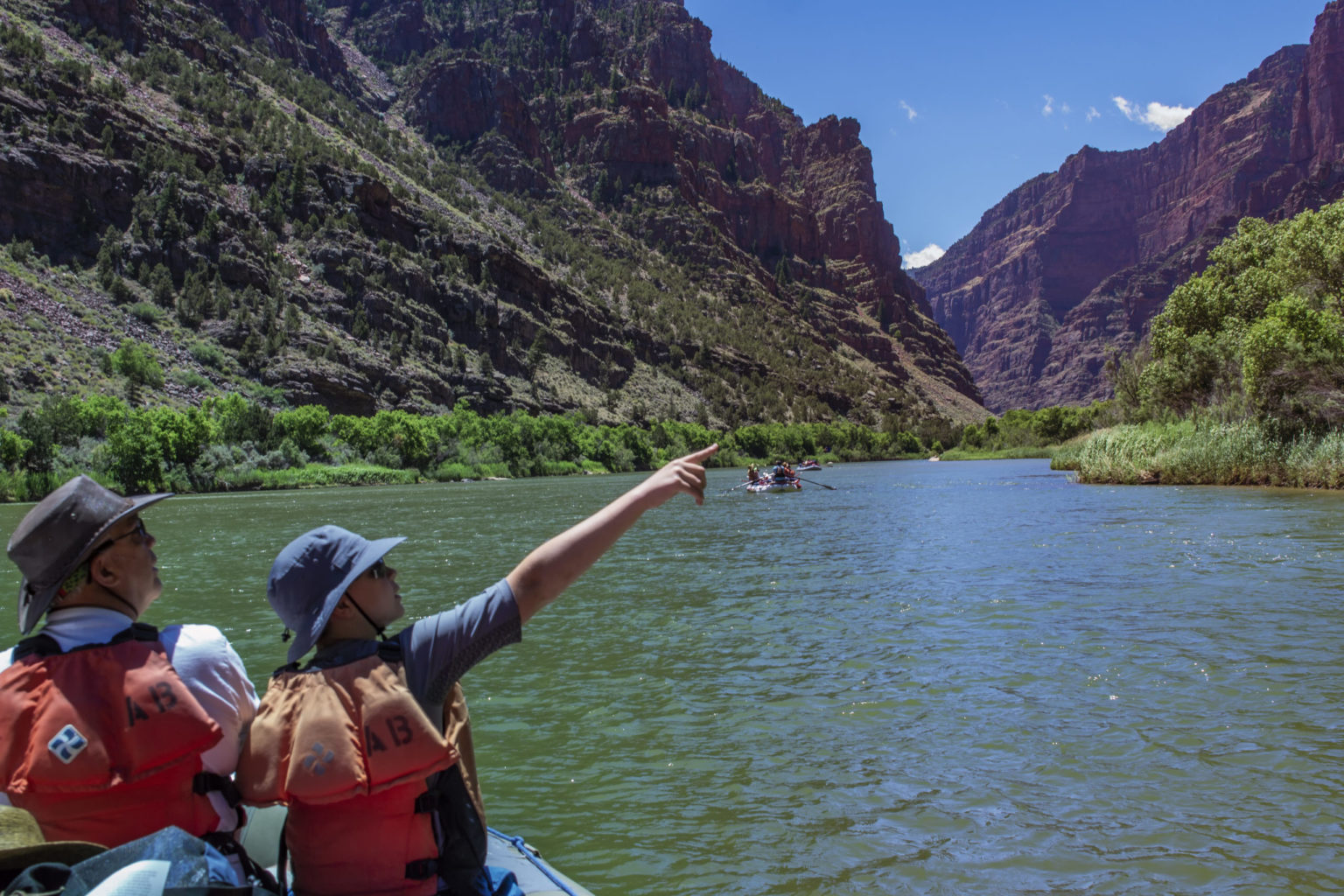 I Spy a Window

If you’re floating along in a desert canyon, the chances are pretty good that you’re going to pass by multiple arches along the way. Some can be tricky to find as some are super small or inconspicuous because of the angle they’re at when passing them by. When someone sees one, all they have to say is “Window!” so everyone else knows to look for it. The person who spots the most windows first by the end of the day wins!

If you’re not on a river trip where those geologic features are present, you can find other things that are common enough to keep the game going but still require some effort for others to find. Bird nests, chipmunks, spires, etc. are great ways to keep people engaged with the scenery while playing a game in the meantime.

While you were sleeping

This is one of those great games to play with kids while you’re rafting because someone always ends up napping on long river floats. While the sleeper is still in slumber, everyone else in the boat comes up with a crazy story together that supposedly took place while they were sleeping.

When the snoozer wakes up, you have to try and convince them that the story is real. Pick somebody who is the most convincing to take the lead, and of course make sure everyone gets a chance to chime in to really make it seem like whatever far fetched tale actually happened. You can get pretty creative with this one while you’re on a river especially! It’s always fun to get wildlife involved in the plot, “I can’t believe you didn’t wake up for that bear fight we had to paddle around earlier…”

This is a classic rafting game where you’ll want to “lose” especially if it’s a toasty summer day. Two people stand on either side of the boat facing each other with the t-grips of their paddles linked together. Both will start leaning back, going as low as they can until someone falls into the river. It’s simple, super entertaining, and a great way to get in the river. 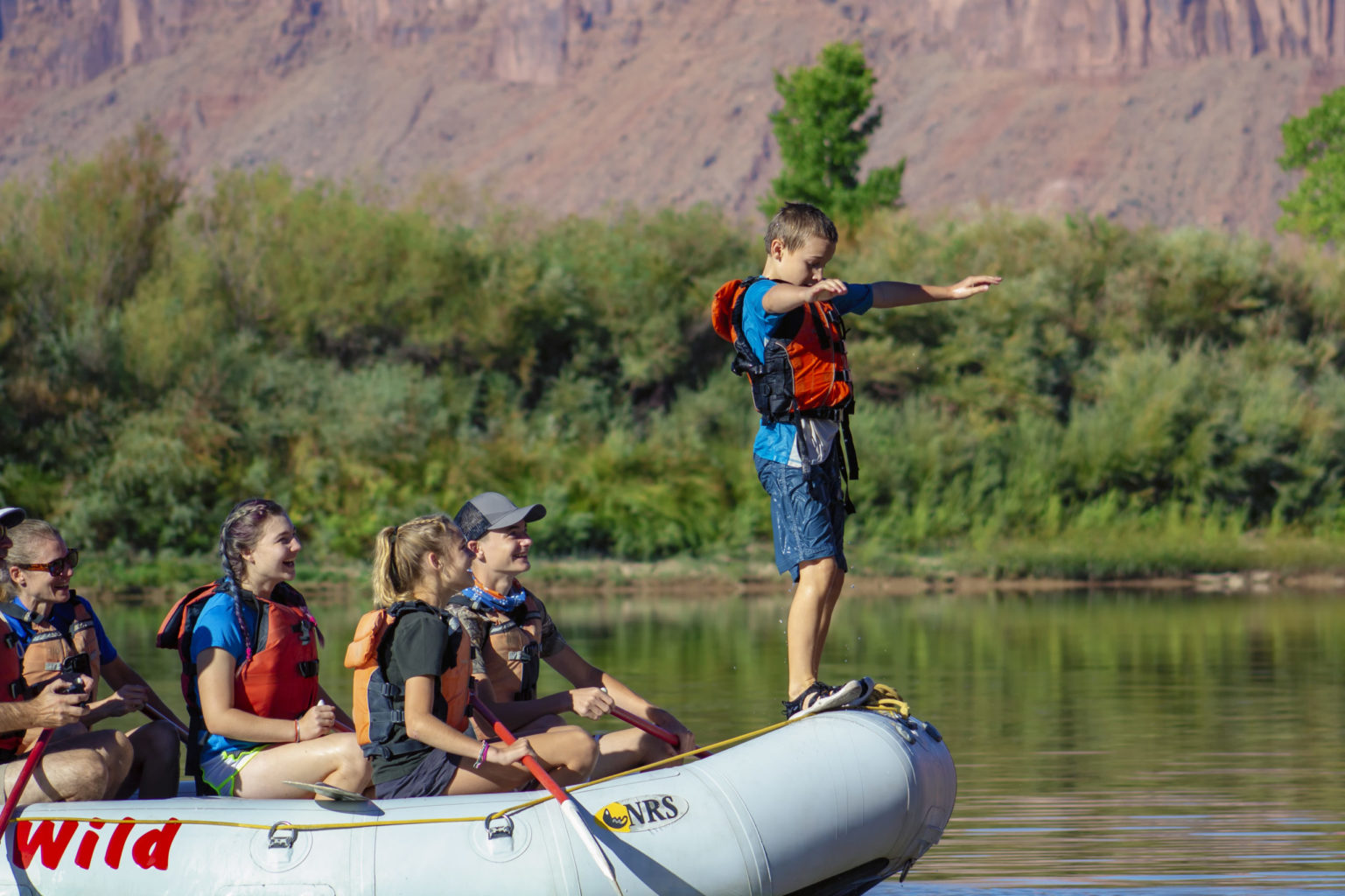 This is another rafting game to play with kids as a way to end up in the river. All this one entails is having someone run around on the outside tube of the raft as many times as they can in a certain amount of time. It’s pretty fun since you can’t actually go that fast around the turns, and people tend to run right off the boat first time around. Have people do the counts out loud to up the drama for the runner! 20 seconds is usually a great time allotment to start with.

We hope you find these games to play with kids when you’re rafting as much fun as we do! We’re all just a bunch of big kids around here after all. There’s always the other go-to classics not listed above, like 20 questions or scavenger hunts! Just remember to never stop playing— even while you’re already technically playing out on the river.