Why Are Cataract Canyon’s Rapids So Big?

Why Are Cataract Canyon’s Rapids So Big? 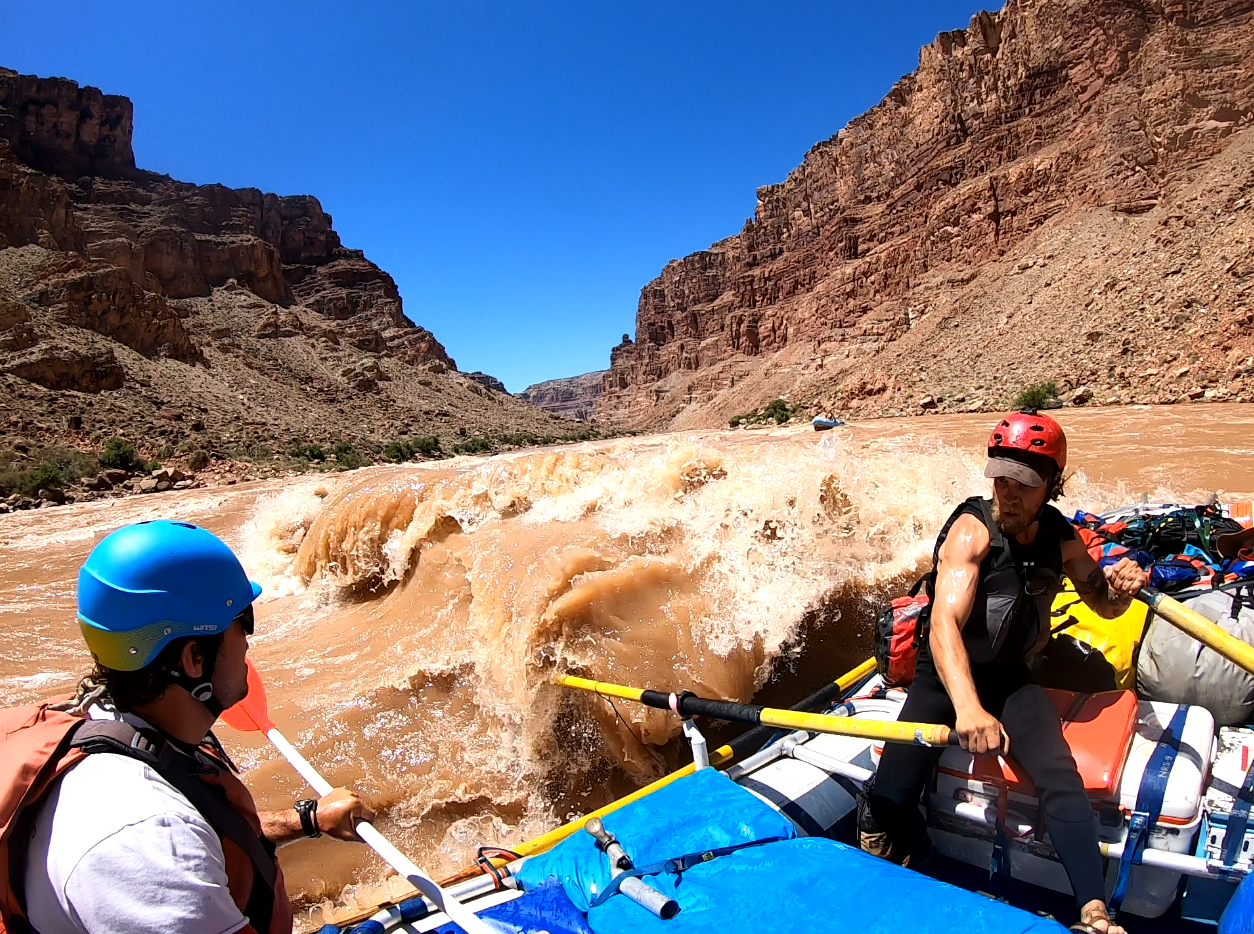 “On starting, we come at once too difficult rapids and falls, that, in many places, is more abrupt than in any of the canons through which we have passed, and we decide to name this Cataract Canon.” — John Welsey Powell, July 23rd 1869, During the first organized expedition of the Green and Colorado River System

In the rumbling belly of Canyonlands National Park, there is a portal to where the desert always thunders. About a thousand feet below the crumbling rim of Cataract Canyon be-flows the Colorado River, barreling through a ramshackled corridor, riddled with boulders as big as a school bus.

From late May to early June, Cataract Canyon churns up and spits out the biggest rapids in the West. This may come as a surprise to those hot on the Grand Canyon, a world renowned whitewater venue that boasts its own class system of rapids. Cataract Canyon sticks to the I-V system from the International Scale of River Difficulty, rolling out plenty of technical III and IV’s, and a few V’s during a good year. 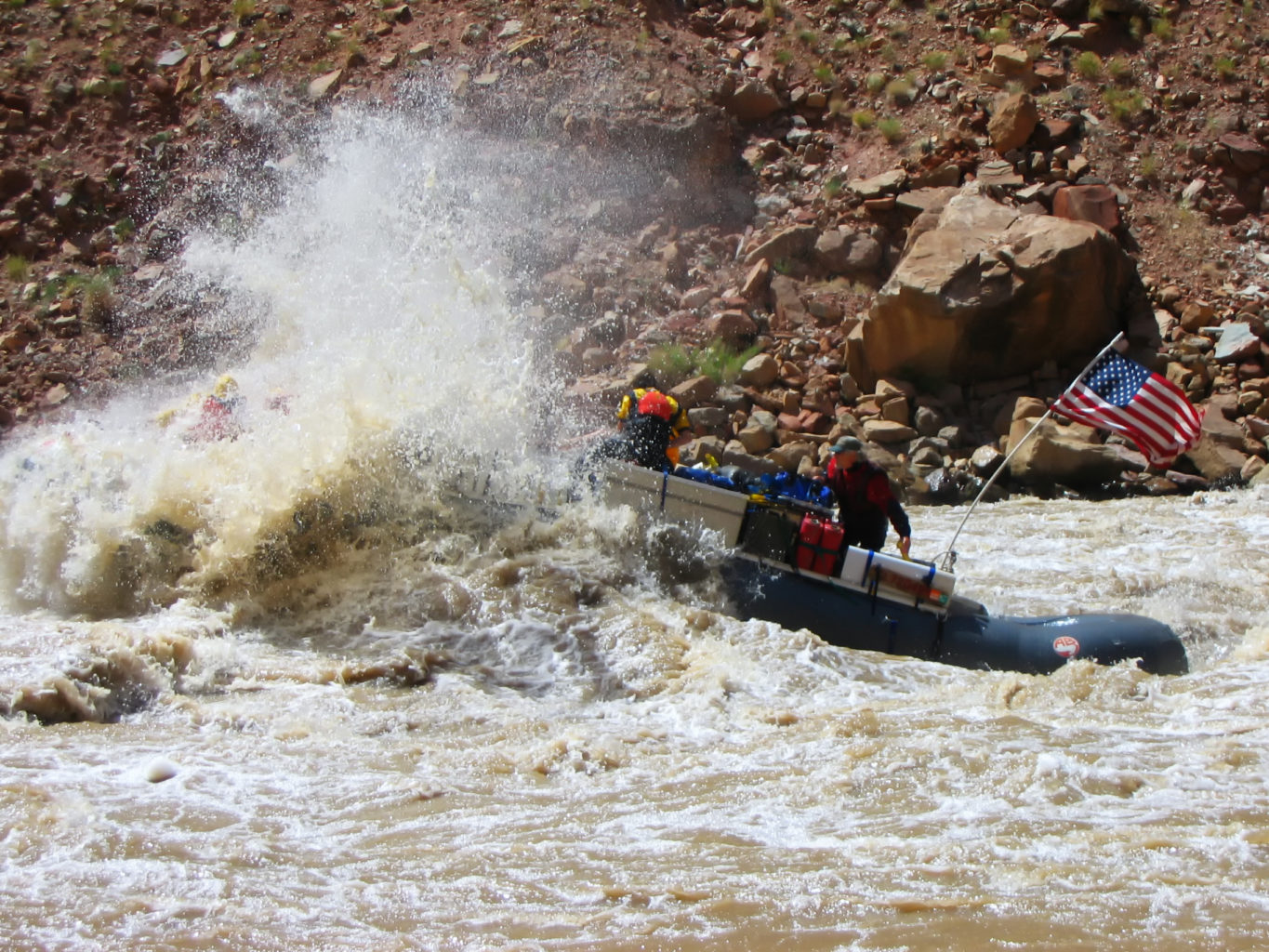 Its 15 mile-long section of rapids are right of passage for only adrenaline hungry river runners, and are well-known to shake up even its veterans year after year. The run comes with hidden holes, boat-chomping haystacks, whirlpools wrapped between frothing rocks, and then some.

Most outfitters and private parties tend to throw at least a four stroke on the back of their big rigs to power through the waves during peak flows (and the long flat water sections, more so). But for crafts filled with weight and moxie, rubberized oar boats and the occasional dory dare to take the ride of a lifetime on the Colorado’s most powerful hydraulics. If they flip and flush all aboard, no one is ever surprised.

There are essentially two grandiose reasons for why Cataract Canyon’s rapids are so large and in charge. One is due to recent works of man, the other being the ancient works of the Earth. Combined, the result is complete Class V combustion. 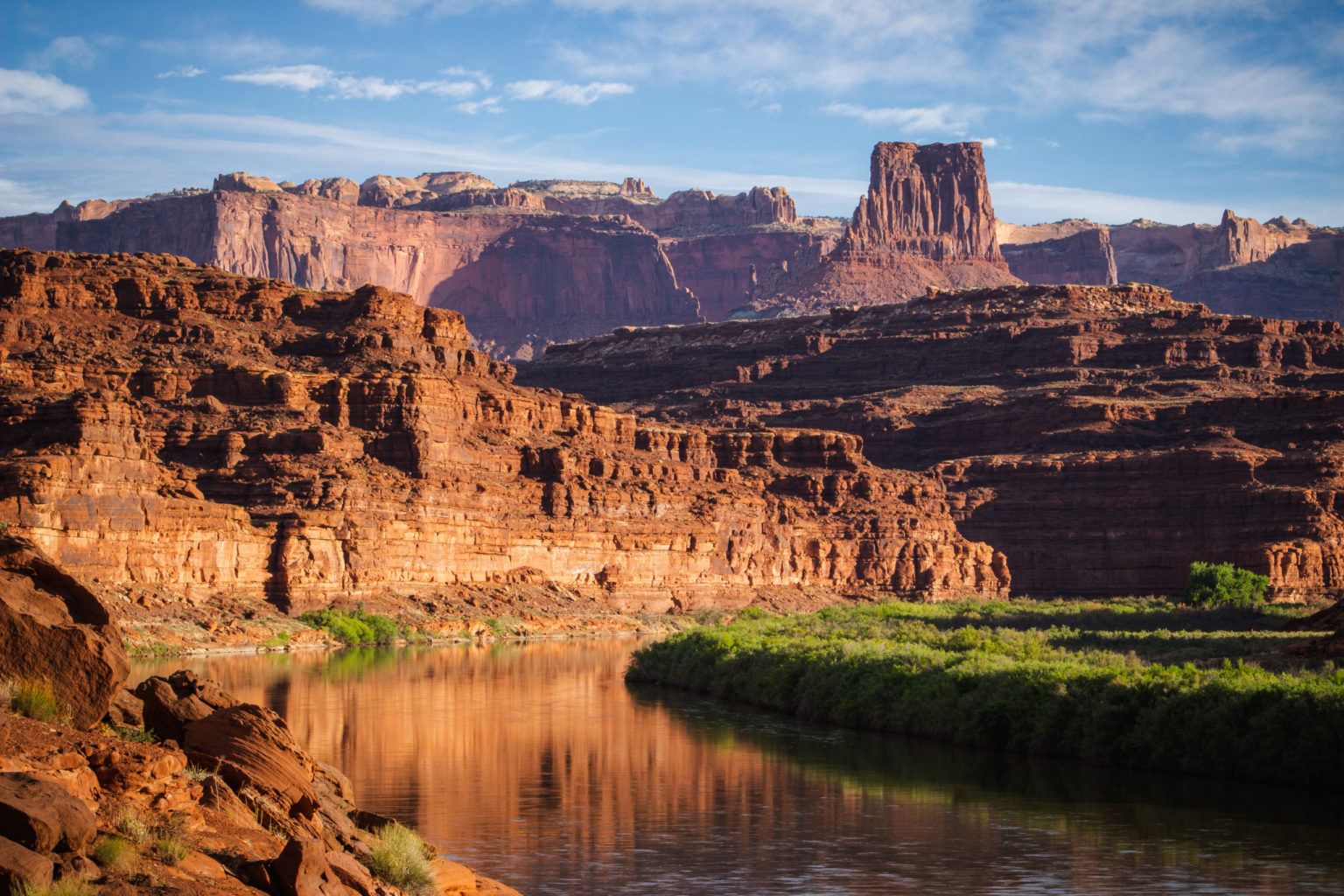 To start, river rapids are often formed by the perfect harmony of volume, constriction and gradient, per Alex Mickel, co-founder of Mild to Wild. In Cataract Canyon, this cocktail comes together at the highest level on the Colorado River. And volume is an incredibly important place to start.

The volume, aka CFS, of the Colorado River fluctuates tremendously due to the capricious winters of the Rocky Mountains. However in Cataract Canyon, it has the help of not only multiple major tributaries upstream (the Gunnison, Dolores, Green, etc.) to beef up its flow, it’s also more than 250 miles away from the nearest man made obstacle— the Grand Valley Diversion Dam in Palisade, Colorado.

And even so, the Grand Valley Diversion Dam doesn’t store and release river water in the way a traditional dam does. It merely snags a portion of the Colorado’s flow rather than stopping it completely.

This allows the Colorado River to run rampant with the swell of spring runoff before meeting Lake Powell at the Arizona border. 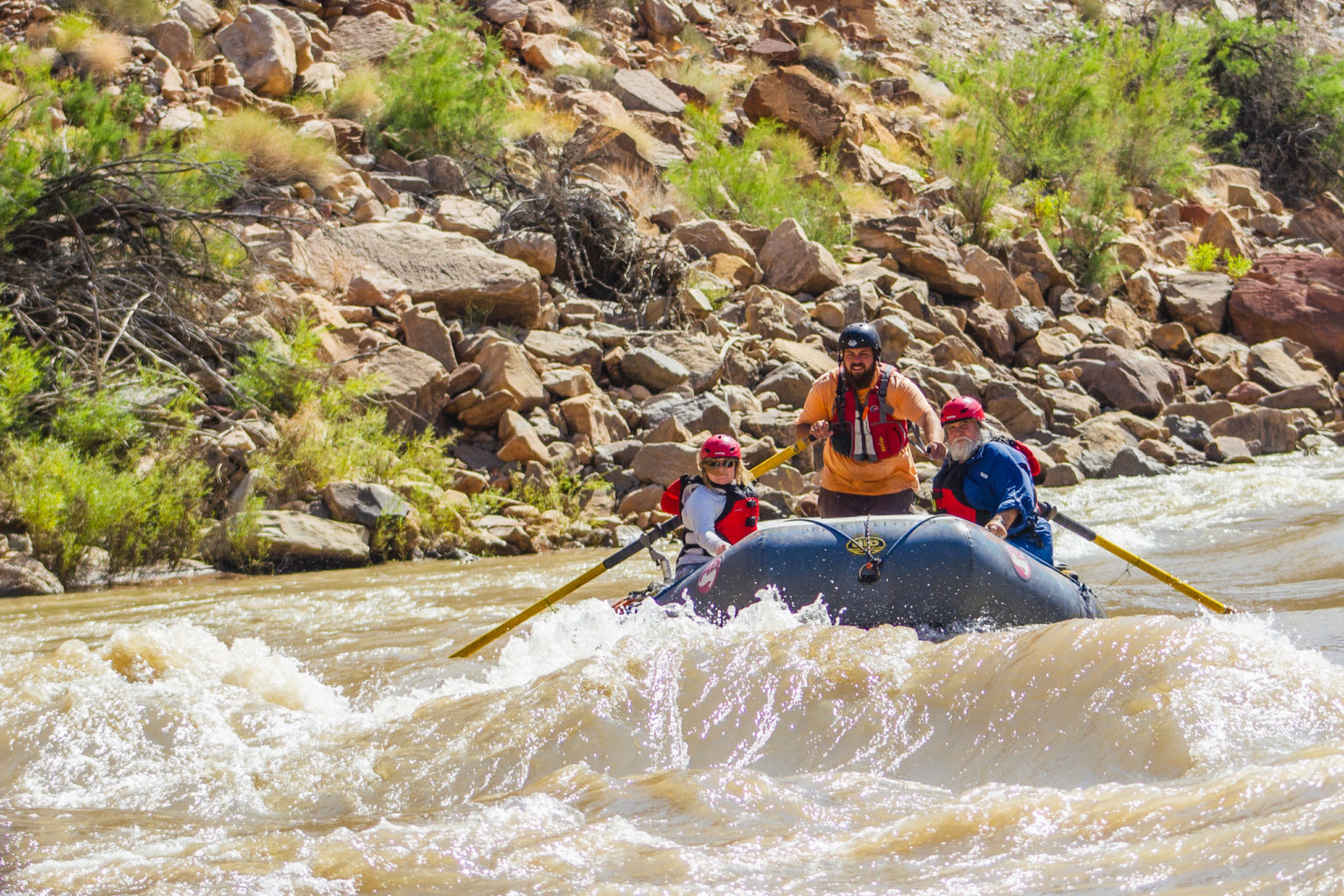 Cataract Canyon is the last free flowing stretch of the Colorado River, which has quickly become a precious rarity in less than a century. Before the making of Glen Canyon Dam/Lake Powell in 1963, the Grand Canyon used to see the powerful, ungoverned waters like the ones crashing through Cataract Canyon, according to Mike DeHoff, principle investigator of Returning Rapids of Cataract Canyon.

Zach Anderson, a geologist with the Utah Geological Survey explains, “Aside from the Paria River and the Little Colorado River, which contribute very little water to the Colorado River in the Grand Canyon, the flows are almost 100% controlled by dam releases from Glen Canyon Dam.”

As of Memorial Day Weekend in 2022, Lake Powell sits at 27% full. As the reservoir continues to recede, stretches of Glen Canyon have returned to its original depths, and with it the rapids.

To learn more about the incredible phenomenon that is happening at this very moment, visit the investigative project, Returning Rapids of Cataract Canyon.

A Minefield of Boulders 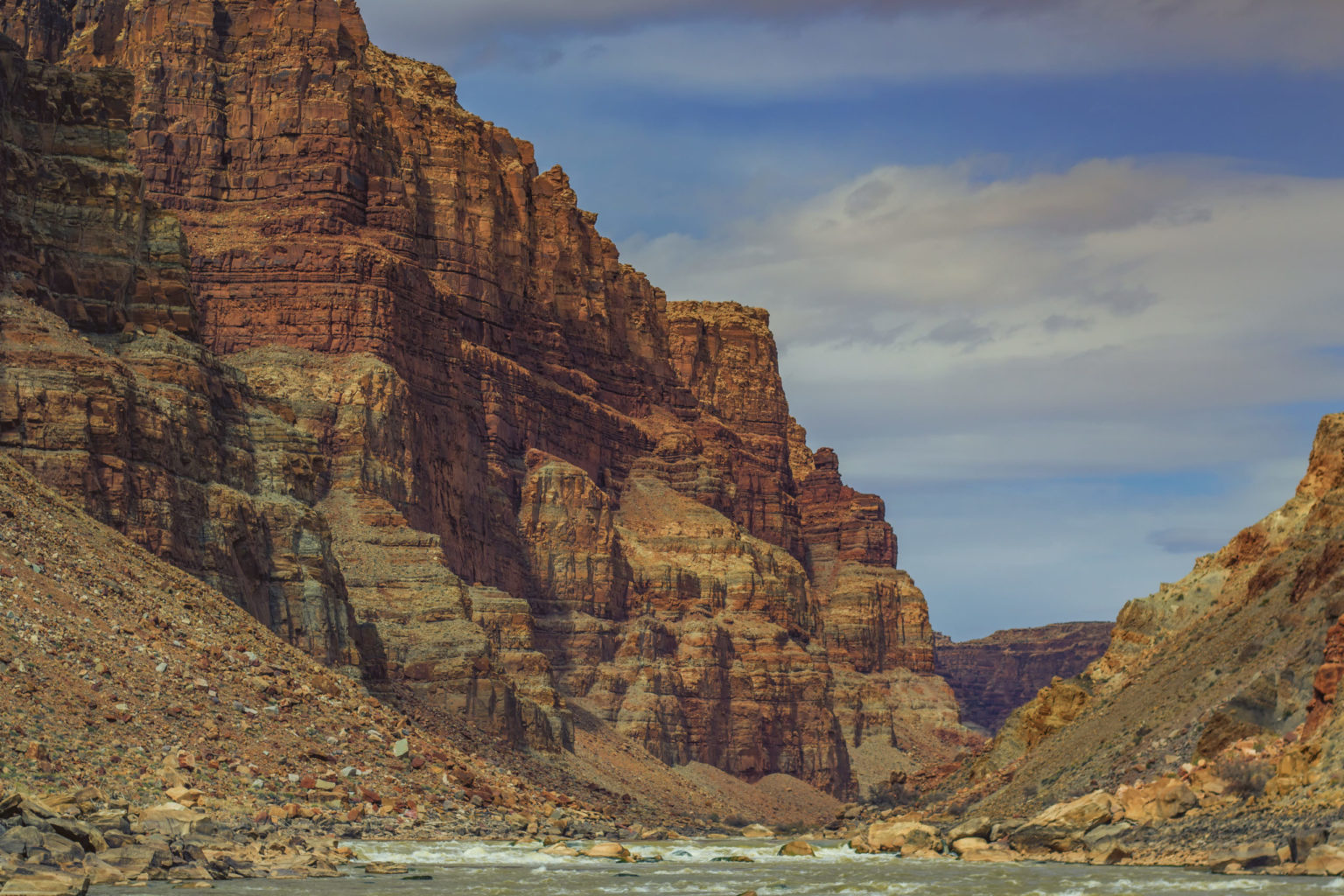 Constriction and gradient put the white in whitewater. On the Colorado River, there is no other stretch during its 1,450 mile journey where these two troublemakers have a bigger shindig than in Cataract Canyon.

As the rift begins to raise a ruckus, one becomes quickly acquainted with the boulder-strewn bedrock responsible. Massive features like “The Button” at the bottom of Rapid 18, or the cliff chunks through the Big Drops, have a far more interesting reason for being in water’s way than just your classic case of shear stress erosion.

“Cataract truly is an anomaly relative to other reaches of the Colorado River,” Joel Pederson, head of the Department of Geosciences at Utah State University, said. “Its core section of rapids, by some measures, is the biggest steepness anomaly along the whole river…  It has the unusual characteristic of the active salt diapirs, or “salt tectonics,” which is what we think is to blame for its awesomeness.”

Pederson explains that this salt layer, aka the Paradox Formation (the very powdery and not-so-sturdy foundation below the sandstones in this region), is responsible for breaking and uplifting parts of the canyon floor. This uplift not only creates debris from the bottom up, but it is contributing to the walls collapsing from above as well. 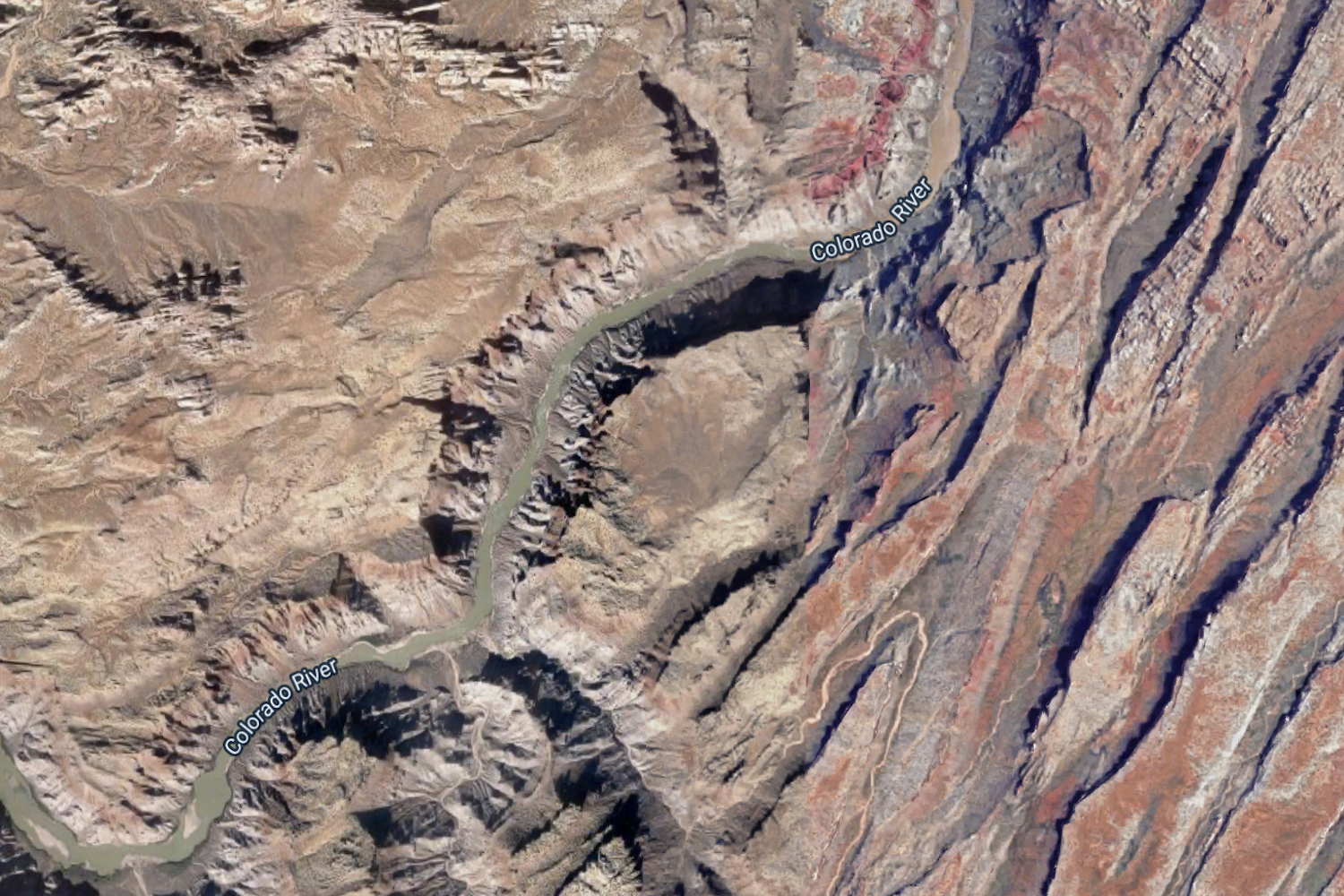 “The whole landscape is falling apart in the region of Cataract,” Pete Lefebver, an investigator with Returning Rapids of Cataract Canyon, said. “There are large toreva blocks tilting and falling into the river corridor, and grabens form between the large blocks of land.”

The large grabens are forming parallel to Cataract Canyon as the land pulls apart like an accordion, creating more debris slides that fill the chasm with more obstacles for the river to negotiate, Lefebver explains.

This faulting along the Colorado River started only about 1 million years ago, helping form the canyon and its rapids we know today, per Anderson, via Furuya and others (2007). Cataract Canyon is quite young geologically speaking, and its rapids are most likely even younger.

This is also probably why its gradient (between 10 and 16 feet per mile) is so prominent despite how far away it is from its headwaters in the Colorado Rockies.

For those wondering how the Grand Canyon’s rapids are formed in comparison to Cat’s, they are mostly made from the gradient running through debris fans at its tributaries, not from debris strewn throughout the corridor, per Pederson. 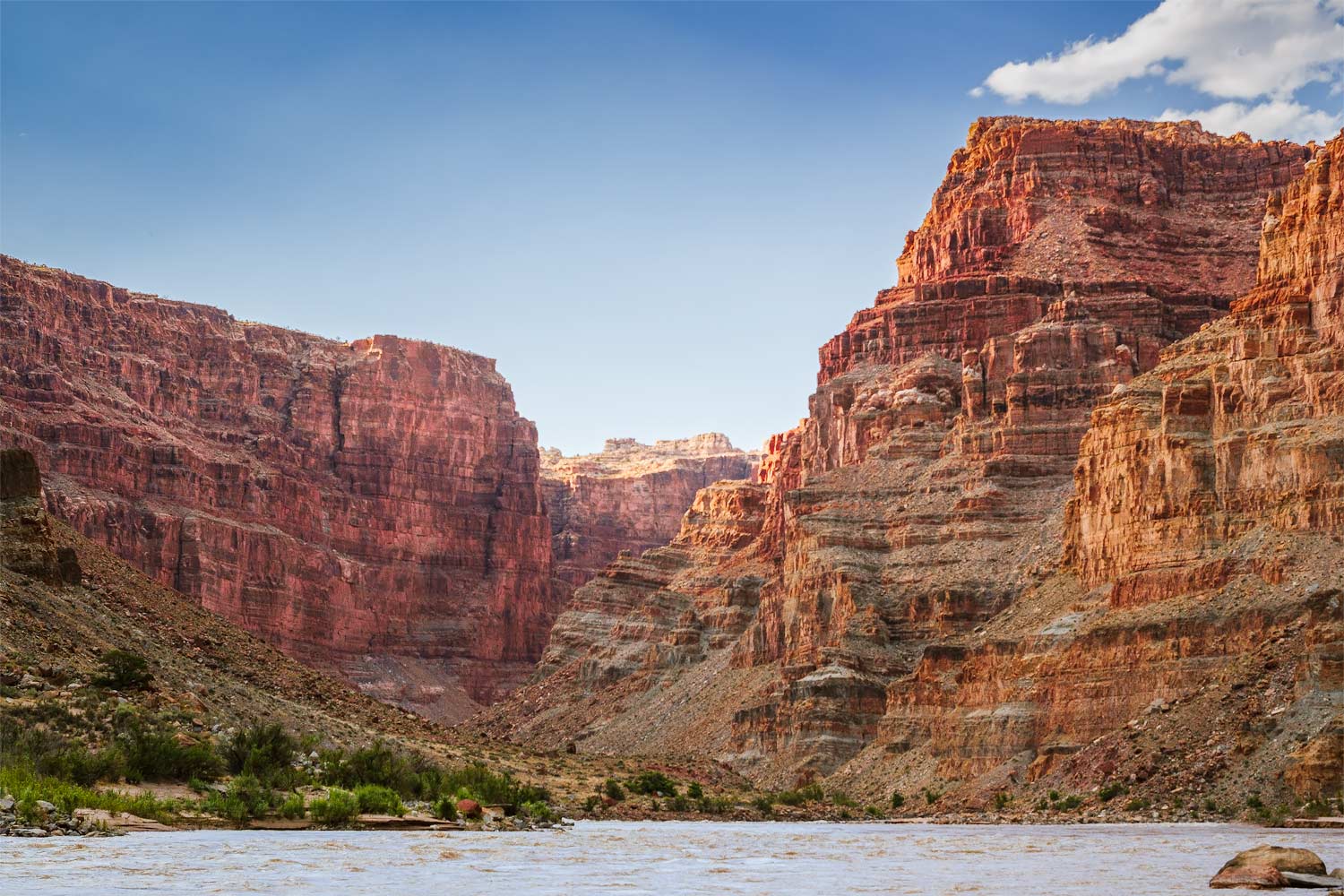 It is much easier to get a permit or hop on a commercial trip to run Cataract Canyon than the Grand Canyon. The journey from the put in at Potash Road to the take out at North Wash is 96 miles.

Most of this astoundingly scenic journey is glossed with flat water, with 15 miles of it containing the 29 whitewater breathing beasts discussed above. Rafting through Cataract Canyon is much more than just a big water trip, as it holds a wealth of archaeological sites, lofty hikes, and access to the most remote wonders of Canyonlands National Park.

It is one of the most cherished places of the Utah desert, and one where many people have dedicated their lives to exploring it. For newcomers who find themselves with the time and tenacity (for mid-spring at least), a voyage through Cataract Canyon ensures one for the books.

A big thanks to Zach Anderson, Mike Dehoff, Pete Lefebver, and Joel Pederson who provided their extensive knowledge for this article. We appreciate you all for taking the time to share your insight about Cataract Canyon and why its whitewater is so rare and spectacular.

Rocks You Need to See — The Amazing Geology in Cataract Canyon