When is the best time to raft?

As you look to the New Year, and plan your fun and adventures, it is helpful to know that the intensity of a river adventure can vary throughout the season. Two factors affect water levels: how hot it is, and how much moisture there is (rain, or snow melt). Generally speaking, rivers, that are non dam released (meaning that their flow is not steady but depends on the amount of snow melt) are more adventurous in the early season, when the snow is melting.

Arizona’s Upper Salt generally experiences high water late March to early April. The rivers in Southwest Colorado experience their high water mid May to mid June, depending on the height of the surrounding mountains. Lower mountains melt off sooner, and have an earlier high water. Higher water levels generally make the rapids bigger, and bring out some of the smaller rapids, but sometimes higher water can wash out some rapids.

If you’re looking for warmer trips and medium water levels, you should come a week or so after peak water flow for that specific river. If you want the trip to be milder and much warmer should consider late season. 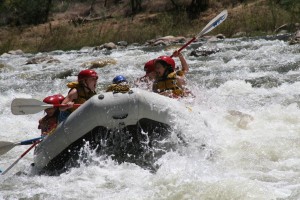 The best part of changing water levels is that you can experience a different adventure every time you raft! Check out the anticipated water levels for the Salt River below! (Of course, it can vary depending on how hot it gets, and how much snow we get, but, so far, it looks like the 2012 river season is going to be a great one!)
Upper Salt River
High Water: Late March – Early April
Medium Water: Mid April – End of April
Low Water: May