Geology and History of Southwest Colorado 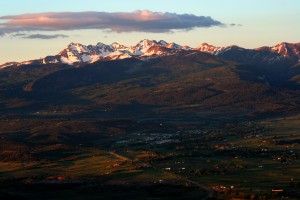 Colorado is popularly known for its mountains, white water rivers, ghost towns, old mining districts and various other outdoor enthusiast activities. One of the primary reasons Durango and the surrounding towns even exist is due to the gold rush of the 1800’s. One of the many old mining towns down in our area is Ouray, CO. Ouray is a quaint little town nestled in a beautiful box canyon. The elevation there is around 7,760 feet, though the mines can be higher than 12,000 feet in many areas!!

Another great perk of the area is the Million Dollar Highway. This is the paved road leading into the town from Red Mountain Pass. In 1883 Otto Mears built the original section of the Million Dollar Highway as a toll road to connect Ouray and Ironton, Another toll road was created to get from Ironton to Silverton. In the Late 1880’s Mears went from building mountain roads, to building railroads. He built the original Silverton Railroad north from Silverton running over Red Mountain. Back then the rail ended at Albany about 8 miles south of Ouray. Mears deemed those remaining eight miles too steep and difficult for the railroad. There was talk of building a cog rail at one point, but it never made it past the planning stage.

In the early 1920’s Mears’ road was rebuilt. The highway got its name for a few reasons. One is that Mears used tailings from old mines around the area to pave the road. The other is that in the 1920’s the original rout was rebuilt at a cost near $1,000,000,000. Today the entire rout is part of the San Juan Skyway Scenic Byway. 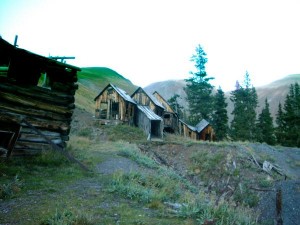 Within a 10-mile radius surrounding Ouray there are still over 10,000 old mine shafts, prospect holes and tunnels. Over the years they have been purchased by private land-owners, or had claims posted, but there are still some areas open to the average enthusiast. Probably Ouray’s most famous mine is the Camp Bird Mine located in the Uncompahgre National Forest (privately owned). In 1985, Thomas Walsh started digging around for some ore to be used as flux for his small smelter in Ouray, and discovered that the ore was tellurium with a gold content worth $3,000. He purchased claims throughout the entire basin and they are known today as the Camp Bird Mine. Between 1896 and 1910 the mine produced over $26 million in gold. The mine was so profitable that Mr. Walsh was able to purchase the Hope Diamond for his daughter.

Another mine located in the Uncompahgre National Forest is the Senorita Mine. The primary materials coming out of this mine are malachite and azurite; both are very calcium rich minerals. Malachite is a deep green color, while azurite a deep, dark blue. A lot of the time they are found intertwined with each other. Though there are specimen all over the dumps, and is a beautiful color, they are typically just surface coatings. So these samples are great for collecting, but we wouldn’t recommend it for jewelry, unless you re going for that raw look!!